1 entry every 30 minutes
(shared with Normal)

1 clear every day
(shared with Normal)

1 entry every 30 minutes
(shared with Easy)

1 clear every day
(shared with Easy)

Zakum was a spirit sealed in a tree deep in the mines of El Nath. A mining town that once existed nearby eventually discovered this tree. At the time, Zakum was a peaceful monster that had no enemies, but the greed of the miners corrupted it. As the spirit was corrupted, it grew smarter, and finally became capable of controlling the town's populace. It forced them to build an enormous statue in tribute to it.

The now evil spirit of Zakum possessed the statue, subjugated all the humans and eventually killed everyone in the town. Zakum now rests deep in the lava caves, waiting for powerful players to challenge his might.

There is evidence found in the Monster Park that Spiegelmann may have had a hand in building it, which he hotly denies, even to the point of attempting to bribe someone who finds the photo into keeping quiet.

In Yum Yum Island, Kumpiders are fusions of Zakum and spiders, formed in an experiment that involves reusing the Erda (life energy) of Maple World's strongest creatures to create new lifeforms.

One of the first major bosses in the game, Zakum proves to be quite powerful by having an array of attacks and summons to keep players off balance. It is advised to have many healing potions prepared before entering the boss's chamber. Zakum can be fought once a day for Easy/Normal (shared), and once a week for Chaos.

An Eye of Fire is used to summon Zakum (Eye of Fire Chunk for Easy mode). There are a 10-second cooldown and an individual death counter of 5 (50 for Easy mode). Once players use up all their lives, they will remain dead until either Zakum is defeated or until all players in the map are out of lives. The arms are still part of the battle, but eliminating them is not mandatory to fight the body; instead, players can fight the body and the arms at the same time for the first 4/5ths of the battle, after which the arms are taken down and players have to finish off the body. However, players can defeat the arms before this, after which Zakum starts using a different attack pattern. However, this will only happen once all the arms are defeated, and the arms will regenerate after a short period of time for Chaos mode.

During the armed phase of the battle, there will be signals on the ground, and the arms will slam onto those spots, instantly killing any players standing in those spots. Occasionally, three platforms will appear on each side of the map, and the ground will be cast on fire, damaging any players that stand on the bottom of the map. During this phase, two arms will clap together and fire a laser that hits the two platforms adjacent to those arms, instantly killing any players standing on those platforms. These two phases will alternate throughout the battle until players reach the last 1/5th of Zakum's HP.

If players defeat all the arms before the last 1/5th of the battle, Zakum will start summoning two of each of its minions. Zakum will charge up an attack, remaining stagnant for a few seconds, and then unleash an explosion that does 99% damage on players' health. Zakum will also be able to cast Weapon Cancel during this phase, rendering non-magic attacks ineffective. The arms will randomly regenerate throughout the battle in Chaos mode, but Zakum will continue with this attack pattern until defeated. The arms will also gain a new ability: grab and hold players (only when two or more people are fighting Chaos Zakum at once). If players do not attack the arm, players being held will be killed but will be released if the arm is damaged.

Once players are on the last 1/5th of the battle, all the arms will disappear automatically (granting 0 experience if undefeated), and players will then be left fighting the remainder of the body. During this phase, rocks will fall from the ceiling, slowing any players and preventing them from using movement skills, such as Flash Jump or Teleport. Zakum will burrow into the ground and reappear in a different spot close to a player. Zakum can cast Magic Cancel, rendering itself immune to magic attacks. Its main attack involves a green cube appearing, and players must hide under the cube to avoid getting instantly killed by its main attack, where it leaps into the air and slams into the ground. 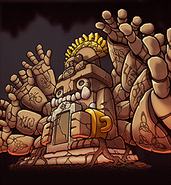 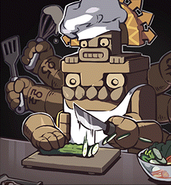