Wonky the Fairy is a nymph which is a fairy of Orbis.

In Remnant of the Goddess, he says the players to talk to him if they want to explore the Goddess Tower, also if they have a Warrior, Magician, Thief, Bowman, and Pirate in their party, he will grant them Wonky's Blessing.

Wonky's Leaf: A long, green leaf used by Wonky the Fairy that masks over any equipped weapon. 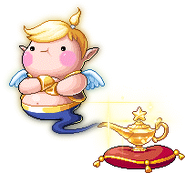 Lil Wonky’s Leaf
Add a photo to this gallery

Retrieved from "https://maplestory.fandom.com/wiki/Wonky_the_Fairy?oldid=272099"
Community content is available under CC-BY-SA unless otherwise noted.