Ereve (as a prisoner of the Cygnus Knights)

“The true soul of a person shows in the hard choices they make. What you decide when the chips are down and time has run out... That is who you truly are!”

Will, also known as the King of Spiders, is one of the Commanders of the Black Mage, and is also the main antagonist of Zero's story as well as the sixth region of the Arcane River, Esfera.

Little is known about Will's past, but Will was a mage who spent much of his time studying the Black Mage's plans before the Black Mage's resurrection, trying to understand his true purpose. He figured that the Black Mage didn't merely want to destroy the world due to the complexity of his grand plan, but struggled to figure out what. In a fit of anger, he stated that his research brought him "right back to the beginning", which was what led him to realize the Black Mage's true plan: to recreate the world without Transcendents, as it originally existed, potentially leading to a world free from imperfection and infinite knowledge. After the Black Mage's revival, Will started to serve the Black Mage, who entrusted him with creating Mirror World to seal Rhinne and prevent her awakening. Will eventually became the Black Mage's most trusted Commander and confidante, but even he didn't completely understand the Black Mage's plan.[3].

Will would soon use a portion of Rhinne's powers against her to create and trap her within Mirror World, preventing her from using her powers. During a meeting with Arkarium, Hilla and Damien, the group surrounds a sealed Rhinne, gloating in their success. Arkarium proudly proclaims that Rhinne's powers belong to him now. When Hilla asks Will if Rhinne is enjoying the dream Will gave her, Will says "Mirror World is no dream, it is a terrible reality". However, Rhinne would shed a tear that would turn into her successor. Will split the child into two, a boy and a girl, sealing the girl and Rhinne's servants away into a temple (which he named the Umbra Temple) while keeping the boy for his own use. Will would then create a ruse using shadow creatures of his own creation, named Darklings, to distract the boy from discovering the girl and becoming a transcendent. Will turned a group of Darklings into humans, giving them false memories and convincing them that they were part of an organization named the Shadow Knights that was dedicated to defeat the Darklings emerging from a temple of darkness (the Umbra Temple).

The boy was given a number as a name, starting from Zero, and would be assigned to defeat Darkling attacks on their base in Shadowvale. He would collaborate with the other Shadow Knights, some of whom he befriended (such as Milo and Fang), and others whom he hated (Keane). The closest friend that the boy had was Fang, a Shadow Knight medic who slowly discovered the truth about the Shadow Knights' mission, as well as Will's true intentions. Every time Zero found out the truth about the Umbra Temple and Will's lies, Will would coerce Fang into drinking a potion that would erase Zero's memories (with his name advancing a number to distinguish the number of times he would be brainwashed, e.g. One, Two, etc). By the time Zero became known as Eight, Fang, who learned that he and the other Shadow Knights were secretly Darklings, decided that he would no longer play along with Will's facade after realizing that Eight truly respected Fang as a friend. He concocted a potion that would reveal the truth, turning himself back into a Darkling, and approaching Eight (who would now be known as Nine). Nine attacked Fang out of defense (thinking that Fang was a Darkling about to attack him), and Fang told Nine to go to the Umbra Temple before disappearing forever. With this, Nine realized at that moment that the "antidote" he was given wasn't meant to cure him from darkness, but rather to brainwash him. Learning soon enough that Will's mission was a ruse, he was able to devise a plan allowing him to reach the Umbra Temple before it was too late.

Nine eventually found a girl chained up within the Umbra Temple, as well as various statues. He freed the girl, but Will confronted him. Will easily overwhelms Nine, since Nine had no idea of his Spider-like abilities, but the children of the Transcendent activate their abilities and warped to another location where Will could not follow them. The boy and girl rename themselves to Zero Alpha and Zero Beta respectively, symbolizing a clean slate from the Shadow Knights. The twins would search throughout the Mirror World for Rhinne's Goddess Teardrops (which also turned into various NPCs, namely Shah Mar, Larelle, Wu Gong, Hera, and Mera), as Will would send his Shadow Knights to attempt to capture them.

The two children faced Will a couple of times. One of those times, Will says that one of them is tainted so they can never be true transcendents. Another time, he reveals that he had been draining Rhinne's powers and orders a manipulated Rhinne to attack her children but she frees herself and attacks Will. Eventually Will would be bested in a final confrontation between the twins and himself, and escaped. As the duo eventually meet the other commanders of the Black Mage in the skies of Grandis, they reveal that Will is still alive, but is in hiding. Will would later reappear during the events of Esfera.

As the player travels through the Arcane River and eventually reaches Morass, the player meets with a squad sent to assist them: Ollie, a member of the Cygnus Knights Thunder Breaker squad; Shubert, a Resistance technician assisting with communication to Ereve; and Melange , a wizard sent from Pantheon to create a portal between Mirror World and Ereve. While flying on a ship through Esfera, a masked individual destroys the ship, scattering everyone. Ollie and the player are left together while Melange and Shubert are elsewhere. While Ollie and the player try to find the others, Will reveals for the first time. The player doesn't know who Will is (unless the player is a Zero character). Will briefly exposes his plans to the player about using Tana (who has become Aeona, Grandis's Transcendent of Light) for a ritual where the Black Mage would absorb her powers and create an entirely new world in his image. However, Will's initial plan was foiled earlier by a mysterious force attacking Will mid-ritual, causing Tana to fall deep into Esfera's waters.

The group discovers that Will is not at his full power because of Tana's influence in Esfera. After battling Will's spider minions, they receive help from one of Tana's own minions, an Executor, who knows that "the enemy of my enemy is my friend", and assists the group in finding Tana. The group eventually finds Tana and Ollie goes underwater to rescue her. Once they reach the surface, Ollie's bandages fall off, revealing a spider mark left by Will. This enrages the Executor, leading to a group of them attacking Ollie, believing her to be working for Will. The player defeats the Executors to protect Ollie, accidentally weakening Tana. Will then appears, attacking the player and their allies. Shubert, only able to teleport one person back to their base, is told by the player to teleport Ollie instead of Tana. Will comments at how you risked the fate of the entire world to save Tana, also remarking that you were the only obstacle the Black Mage had to deal with, making it natural for others to be sacrificed along the way. The masked person appears right before Will drops the player into the water, leaving them to choose between saving the player or Tana. The masked person saves you as Will flees, and is revealed to be the one who stopped the ritual earlier. The individual tell the player "In order to stop him…. the great adversary is needed", and sends you back to the base.

Back at the base, the player learns that Ollie's spider mark is a poisonous curse that can only be reversed by the caster, Will. The only way to reach Will is through a mirror gate, and the player is escorted by Melange throughout a reflection of the Radiant Temple (the real temple is where Tana and Aeona once lived). The player confronted Will by entering yet another mirror within. Will resumes the ritual and tells the player to kill Tana in order to stop the ritual, stating that a person's true self is determined at the moment of choice, and then fights the player directly.

Will reverses the curse after being defeated, but also tells the player to kill Tana to stop the ritual. However, the player hesitates at the last moment out of guilt and empathy for Tana, who has suffered for many years. Tana is then absorbed by the Black Mage, giving him the powers of two Transcendents. Will is surprised by the player's hesitation and admits his admiration for the player, but says he cannot let the player, who is the Black Mage's greatest adversary, live. He escapes after unleashing a horde of spiders to attack the player, but Melange creates a gate for Ollie, the Chief Cygnus Knights, and Neinheart to travel through and rescue the player. The player regrets being unable to stop the ritual, but Neinheart consoles the player by saying that knowing the Black Mage's plan is an achievement in and of itself, and that now they are ready for the real battle. Melange recovers Will's book that was dropped during the chaos and takes it to further study it.

Afterward, Will has retreated into the deepest part of Mirror World, lamenting about being unable to defeat the player for good, but is glad that the Black Mage's plans have succeeded, and awaits the creation of the new world. However, the masked person followed him there, and proceeds to fight Will.

After the defeat of the Black Mage, Will's unconscious body is seen drifting around the seas of Esfera. He is discreetly taken and kept locked up in a jail cell deep in Ereve. Neinheart voices his concerns about keeping a dangerous convict near the Empress, but Will is now powerless with the Black Mage dead, so he eases up. As Will was the only one of the Black Mage Commanders to know of the Black Mage's true plans, his knowledge of the world of Transcendents would be paramount in the Alliance's battle against another Transcendental threat. Will had recently regained consciousness and would be interrogated by Grendel the Really Old, acting suspiciously cooperative. Will realized that Grendel had studied and learned of the Black Mage's intentions, and gave him a core filled with the Black Mage's thoughts. This sends Grendel into a haze that leads to him disappearing into the Arcane River, where the player would pursue him with Grendel's students Lily and Elwin in tow. If playing as Zero, Will states that although he himself is a very patient person, he cannot wait for what comes next. 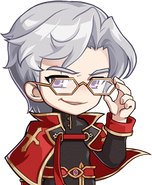 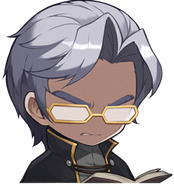 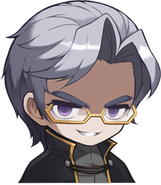 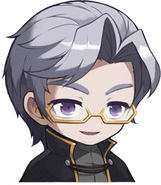 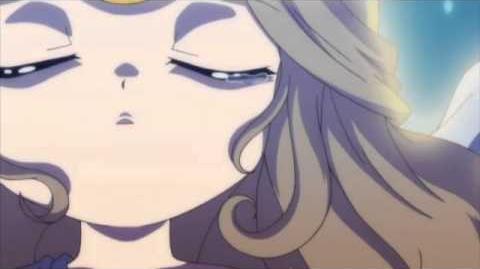 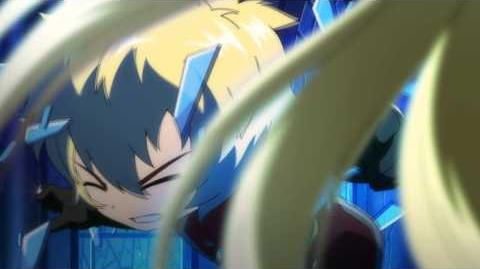 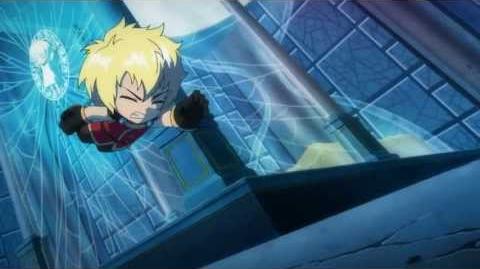 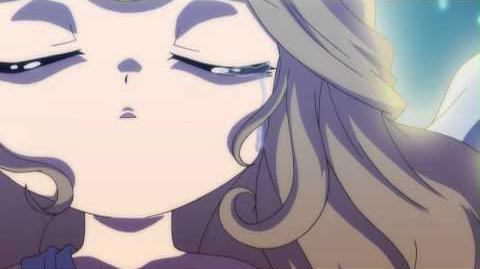 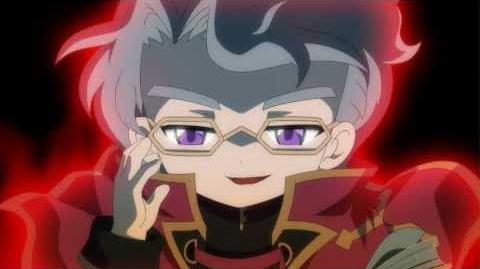 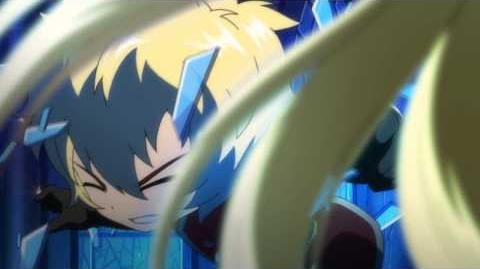 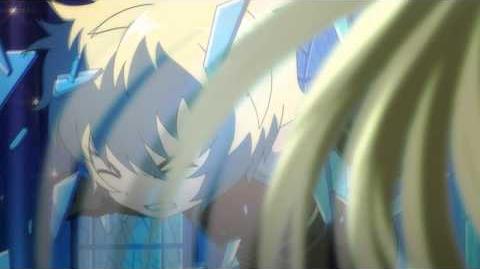 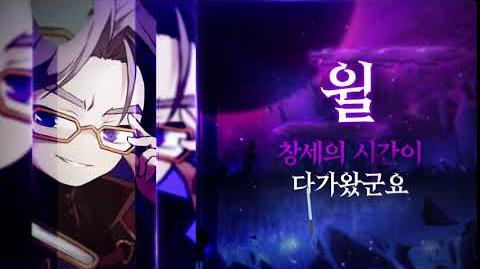 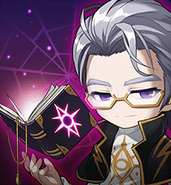 Will Soul Collector artwork
True character is reflected
in the choices people make. 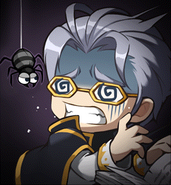 Will Soul Collector artwork (all souls added)
What was a surprise!
I didn't choose that!

Will Boss Queue artwork
Add a photo to this gallery

Retrieved from "https://maplestory.fandom.com/wiki/Will?oldid=258071"
Community content is available under CC-BY-SA unless otherwise noted.