The Wild Hunter is a member of the Resistance that fires a volley of arrows from the back of a tamed Jaguar to overpower foes with relentless attacks. The Wild Hunter is skilled in both close-range and long-range combat. The Wild Hunter has all the characteristics of a Bowman - quick movements, wide attack range, moving attacks, and they have near-unequaled mobility.

Wild Hunters are unique, as they need to capture and ride a Jaguar in order to perform most of their skills. Jaguars, which give Wild Hunters a huge boost in mobility, come in a variety of colors, and players can select a color that suits them best. In comparison to other bowman-based classes, Wild Hunters have higher HP, MP, critical rates and profoundly better mobility. However, a Wild Hunter can be more difficult than other Bowmen to play at first, though it definitely makes up for it with strong attacks at high levels.

UNMOUNTED: The summoned Jaguar stays alongside the Wild Hunter and has access to several separate [Jaguar Skills] that can be used simultaneously with the Wild Hunter's own skills. This mode trades toughness and mobility for raw damage output, but it can be tricky to manage that many skills at once.

MOUNTED: The Wild Hunter rides the summoned Jaguar in combat. This mode sacrifices being able to use some of the Jaguar Skills but boosts the speed and toughness of the Wild Hunter, and allows for hyper-mobile combat; the Wild Hunter is able to use all of their bow skills while in full motion at the max 190% speed boost of a mount, and this is enhanced even further at the 3rd job advancement when they get access to a very unique skill: Backstep. This toggled ability allows for the Jaguar to run and even jump backwards at full speed keeping the Wild Hunter facing the forward direction and still able to use all of their combat skills, giving them an unparalleled ability to kite opponents. While mounted they also get a very high Power Stance chance up to a permanent 100% chance, which means enemy attacks can't stagger them and therefore interrupt their movement or attacks, and an enhanced upward jump with the skill White Heat Rush allowing them to climb up areas far faster than most other classes. Players that are able to fully master this mobility and the Wild Hunter's long range can be very, very lethal. One other aspect of the Mounted mode is that the Wild Hunter's attacks become linked to semi-automatic Jaguar Artillery connected to the saddle which match the main bow attack skills (but not the regular attack) shot-for-shot; the arrows from the crossbow do less damage than while Unmounted, but coupled with the Artillery shots the sum total damage per-cast of the skill roughly matches the Unmounted mode. The skills are effectively switched to have a larger number of smaller attacks, and are quite effective at mowing through groups of weaker enemies while still being able to put heavy damage on single larger ones. With the Artillery lower down on the body of the Jaguar than the Wild Hunter's bow, this also allows the Artillery shots to hit very small enemies that the bow shots may be too high up to hit.

There are five main Jaguars that Wild Hunters can capture. There are the regular ones, which are basically the colored ones. Then there is Jaira, which is a black-colored jaguar with glowing eyes, Snow White, which is white with golden marks, Onyx Jaguar, which is black with glowing eyes and armoured, and lastly, Armoured Crimson, which is red with a claw mark and is armoured. Both Snow White and Onyx gives an additional 10% buff duration when one uses Jaguar Rider. Armoured Crimson reduces damage taken and increase resistance to statuses by 10%. In order to find Jaira or Snow White one has to go to the Jaguar Habitat and keep changing channels until a blue text appeared saying, "Jaira/Snow White has appeared from between the boulders." Jaira has a spawn time of 6 hours, while Snow White has a spawn time of 60 hours. Wild Hunters can also switch between their captured jaguars by talking to Belle or by using the Jaguar Management skill.

Wild Hunters get a strong set of passive and active buffs and a couple of decent Summoning skills as they go through job advancements, improving their speed, toughness, mobility, accuracy and damage rate, and allowing them to be flexible in a wide variety of situations. In terms of stat distribution it is entirely viable to devote nearly all stat points from levels into Dexterity; this simultaneously increases the attack damage, defense (through Avoidability) and accuracy of the Wild Hunter. Being able to safely concentrate stat points like this isn't common, and can over time allow the Wild Hunter's attacks to become very strong and rarely miss.

At Level 10 as a Citizen, the player have the opportunity to become a Wild Hunter. You must speak to Headmaster Ferdi in Edelstein. He will issue a letter, which can be used to teleport to the Underground Base when used. Afterwards, just speak to Belle and you will advance one to a Wild Hunter.

At Level 30, players will have to talk to Ferdi. Then talk to Belle who will tell ask the player to go the airport. When you arrive at the airport, you will have to fight Schiller and obtain his Black Wings Report. Afterwards, return to Brighton after defeating Schiller to advance.

At Level 60, speak to Belle. Then head to Road to the Mine 1, accept the quest from Stephan and pay 100,000 mesos for the Black Wings Hat in order to get into the mine. Defeat the Energy Conducting Device then head back to Belle to advance.

At Level 100, talk to Ferdi to receive the quest and then talk to Claudine, who will be giving you the mission because Belle has gone missing. Head to Second Square speak to Gelimer, convincing him to give you the card key to his secret invention. Head to Security System Research Center 3 and enter the pipe, and then drop down the shaft to find Belle. Defeat Poison Gas Generator and go back to Secret Plaza with Belle to receive the advancement. 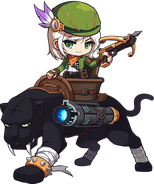