“Stronger now are the people of the Maple World, but still not enough to defeat the Black Mage.”

Von Leon, also known as the Lion King, is one of the Commanders of the Black Mage.

Von Leon was the king of Lion King's Castle in El Nath Mts. Many people were loyal and devoted to him, viewing him and his castle as a symbol of strength to the people of El Nath. One time, centuries ago, he disguised himself as a commoner to attend a festival, meeting a florist at the market named Ifia. The two bonded over flowers, especially roses, and eventually married, with Von Leon giving Ifia a snow rose and a rose garden during his wedding proposal[3].

Since El Nath was perpetually cold and covered in snow, the kingdom wasn't wealthy or bustling with people, and thus the people were more modest. When news spread of the Black Mage causing destruction across Maple World, the people didn't expect the Black Mage to attack their kingdom, which had nothing of value. Von Leon declined an offer to join an Alliance[4] formed to defeat the Black Mage as a result. The Alliance did not accept this response and raided the kingdom, accusing them of serving the Black Mage. The kingdom was too weak to defend itself and was overpowered by the Alliance. Everyone except Von Leon, including Ifia, was killed, with the castle as the only thing left. Von Leon, having lost his kingdom, his people, and most importantly his wife, joined the Black Mage out of despair and revenge. With the new power granted to him by the Black Mage, Von Leon enacted his revenge on the Alliance, destroying them with ease.[3]

Meanwhile, a wandering mercenary named Ryude notices smoke emanating from the Lion King's Castle, and investigates it with his group. As they entered the castle, they notice a lack of soldiers and a lot of monsters within the castle walls. They encounter a human who mutters "the Lion King... The evil Shamaness", before dying to his injuries. Mylar, one of Ryude's fellow mercenaries, detects two more humans nearby within the castle. Believing them to be in danger, Ryude tracks them down, only to discover that the two other humans are Von Leon and Hilla, another commander of the Black Mage . He eavesdrops on their conversation, learning that the Black Mage is planning an attack on Ereve. Before Ryude can leave, Von Leon notices him and challenges him to a sword fight. With the Black Mage's powers, Von Leon overpowers Ryude with ease. Von Leon asks for Ryude's name, having remembered him from years ago, but Ryude refuses to tell him. Before Von Leon can finish him off, Alicia, Maple World's Transcendent of Life, intervenes and teleports Ryude away.

Ryude and his group head to the Dragon Master's Tower, built by Freud the Dragon Master to sound an alarm of danger. Mylar works on a spell to activate the tower, which was estimated to take 15 days to work. Von Leon learns of this and sends an army to bring down the tower's gate before they can activate it. With a lot of bloodshed and sacrifice, Ryude's group manages to hold out long enough to activate the tower, with Ryude being the final survivor. Von Leon once again asks the mercenary for his name, for him to answer: Ryude. Von Leon congratulates him, having earned his respect for fighting well.[5]

The Black Mage would send his commanders to cause destruction throughout Maple World, which included the invasion of Kritias (when Von Leon is invading, Lion King's Castle mobs will be part of the army).[6] The purpose of this was to destroy any traces of Tana, Grandis's Transcendent of Light, as the Black Mage would need to capture her for his plans.[7] As a Black Mage commander, Von Leon also would attend meetings with other commanders such as Orchid, Arkarium, and the Demon, where he acted as a mediator between Arkarium and the other two, as Arkarium's snarky attitude often led the meeting nowhere. When Arkarium and Von Leon tell the Demon that the Black Mage ordered for his home near Leafre to be destroyed, the Demon left to discover his home in flames, with his brother and mother nowhere to be found. Presuming them both dead, he betrays the Black Mage and aids the Heroes in sealing the Black Mage, earning the distrust of the other commanders, especially Von Leon. Unbeknownst to everyone else, the Demon's home was destroyed by Arkarium out of envy, to convince the Demon to betray the Black Mage, while secretly taking in the Demon's brother Damien as his apprentice.[8]

In the present day, Krag of the Silent Crusade discovers dark energy seeping from the castle. He calls a member of the Maple Alliance[9] (the player character) to investigate the castle, where they discover the monsters that Ryude fought centuries prior. Eventually, the player makes their way to the Fourth Tower, where they meet Luden, a ghost who was one of Von Leon's Knights. Luden, among with many other servants in the castle, chose to remain loyal to Von Leon, but not could not rest in peace due to Von Leon now serving the Black Mage. Luden hesitantly decides that Von Leon should be defeated, believing that the old Von Leon would appreciate their thinking.

The player also encounters Ifia as a ghost. Like the servants, Ifia was also not at peace, having tried to reach out to Von Leon to no avail. Believing that Von Leon has forgotten her, she asks the player to talk to him for her; when the player does so, Von Leon is enraged, telling the player not to speak her name and refusing to believe that the player has spoken to his deceased wife. Ifia then has the player retrieve a key to the Rose Garden she once cherished with Von Leon, where she gives the player a Flower Book to deliver to Von Leon, believing that this would change his mind, but it angers him further.

The player learns through Luden about the Alliance of the past, and how the monsters in the castle used to be Von Leon's soldiers. As proof, Luden has the player hunt some of the monsters for Alliance Badges, proving that some of the soldiers were actually spies sent by the Alliance. After relaying this information to Ifia, she comes up with one last idea: she takes the player through a secret passage that only Von Leon and Ifia knew about. Von Leon at first refuses to believe that the player has talked to Ifia, but then realizes that he could not see or hear her as a result of becoming too ingrained in his villainy and desire for vengeance to turn back. He gives the player a pendant with a picture of Ifia which he used to remember her by, believing himself no longer worthy to own the pendant[3].

In the present day, the Demon would make his way to Von Leon's Audience Room through a secret passage near the entrance, where Von Leon berates the Demon for betraying the Black Mage centuries ago. Von Leon tells Demon that the Black Mage killed the Demon's family as a smaller part of the Grand Plan, and the Demon calls him out on this due to the Lion King selling his soul to the Black Mage after losing his wife. The Demon also mentions that the Black Mage will likely betray Von Leon in the future, but Von Leon refuses to listen, saying that he has nothing left to lose. The Lion King says he no longer wishes to converse with traitors and tells the Demon to go to the Temple of Time for answers before kicking him out of his castle[10].

Despite hating Demon for his disloyalty, Von Leon did not share that same resentment toward his brother Damien, who would soon become another commander of the Black Mage out of desperation after losing his mother. Von Leon empathizes with Damien, having joined the Black Mage after losing his wife and his kingdom. Having learned the hard way, Von Leon tells Damien that even if his mother could come back to life, he would never be able to go back to living happily with her, his soul being tainted by sin.[11]. 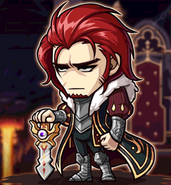 Von Leon Soul Collector artwork
My people, my followers, my queen...
They're all gone... 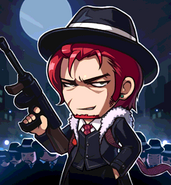 Von Leon Soul Collector artwork (all souls added)
I shall seek revenge against the world
that took everything away from me. 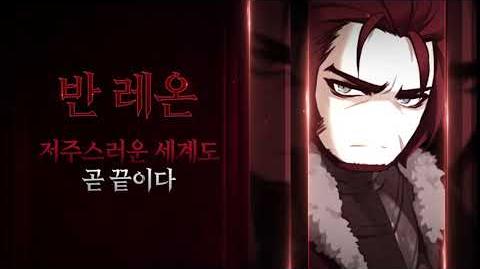 Retrieved from "https://maplestory.fandom.com/wiki/Von_Leon?oldid=248687"
Community content is available under CC-BY-SA unless otherwise noted.