Von Bon is one of the four main bosses of Root Abyss, working for Damien to restrict the World Tree's power. He is the first boss Alicia requests to defeat.

His FriendStory counterpart is a part of Damien's band, where he plays the Electric Guitar.

Von Bon's Fury. It's parody of Attack on Titan. 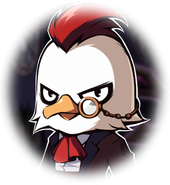 Retrieved from "https://maplestory.fandom.com/wiki/Von_Bon?oldid=242826"
Community content is available under CC-BY-SA unless otherwise noted.