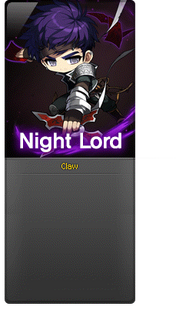 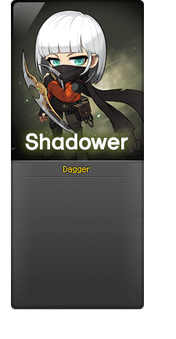 The Night Lord job branch is centered around using Throwing Stars alongside their primary weapon, Claws, and Charms as secondary weapons. They throw stars at enemies from afar to deal damage, with a new single-target attack in later job advancements. They have several attacks for dealing with multiple enemies, including Shuriken Burst, which tosses a flaming star at enemies, Gust Charm, which pushes enemies back, Shade Splitter, which uses 3 stars and has shadows attack enemies in front of the player, and Showdown, which deals significant damage and raises EXP and drop rate gained from enemies attacked. In 3rd job, they gain a skill called Shadow Partner, which mimics the player's attacks, using extra stars but dealing extra damage at a reduced rate. Their job specialty skill is Assassin's Mark, which launches randomly flying stars around to damage enemies while attacking. This skill is upgraded in 4th job with Night Lord's Mark, making it stronger. Their second job is Assassin, their third job is Hermit, and their fourth job is Night Lord.

The Way of Hermit

The Shadower job branch, unlike Night Lords, uses Daggers as their primary weapon, and Dagger Scabbards or Shields as secondary weapons. Instead of attacking from afar, Shadowers focus on fighting monsters up close. They have a variety of attacks for fighting multiple mobs, including Savage Blow, Phase Dash, and Boomerang Stab, as well as a few attacks for one-on-one combat, including Midnight Carnival and Assassinate. In 3rd job, they gain a skill called Shadow Partner, which mimics the player's attacks, dealing extra damage at a reduced rate. In 4th job, they gain a buff called Shadower Instinct, which increases their attack as well as giving a new method of gaining damage called Body Count; this system allows the player to deal extra damage with Assassinate as well as give the player additional attack power when their Body Count is full and the buff is used.

Their Hyper Skill Flip of the Coin allows them to significantly increase their damage (stacks up to 5 times). Their job specialty skill is Critical Growth, which increases Critical Rate every few seconds and while attacking, resetting every time it reaches 100%. This skill is upgraded in 4th job with Prime Critical, increasing Critical Rate even further whilst gaining the ability to increase Critical Damage in a similar manner. Their second job is Bandit, their third job is Chief Bandit, and their fourth job is Shadower.

The Dual Blade job, unlike other Thieves, has their own tutorial, where they start in The Secret Garden. Using Daggers as primary weapons and Kataras as secondary weapons, Dual Blades utilize fast attacks, some of which can be chained together.

Dual Blades, unlike other Explorer Thieves, do not gain a job specialty skill in 2nd job, but have other abilities to make up for it. For example, Dual Blades have Shadow Meld, a buff that gives 100% critical when the player dodges attacks, as well as Final Cut, a damage buff that increases final damage temporarily. In 3rd job, they gain a skill called Mirror Image, which mimics the player's attacks, dealing extra damage at a reduced rate. This skill is also required for Mirrored Target, which allows the player to place a dummy to lure enemies away from the player, as well as activate Shadow Meld whenever it gets hit. Unlike other jobs, they have six job advancements instead of four. Their first job+ is Blade Recruit, their second job is Blade Acolyte, their second job+ is Blade Specialist, their third job is Blade Lord, and their fourth job is Blade Master.

Retrieved from "https://maplestory.fandom.com/wiki/Thief/Skills?oldid=268888"
Community content is available under CC-BY-SA unless otherwise noted.