Stellar Detectives is a storyline delivered as part of the v173 Patch released on May 18th, 2016. The plot focused on pets that are going missing in Maple World, and the team of the player, Beast Tamer, Hayato, Kanna, Jett and Zen that must find them. After completing the quest line, the "Hyperspace Cube" mini-dungeon can be done 3 times a day in order to get souls, badges, and rings that give buffs like the Tower of Oz.

After Tutu, the beloved mascot and mystical frog creature, is kidnapped from Arboren, the village calls on local hero Chase to rescue him. Identifying herself as Detective Chase of the fictional Chase's Detective Agency, she starts her investigation into Tutu's disappearance by heading to Henesys. There she meets the player, as well as Hayato and Kanna, who are also searching for a mystical creature, Nenne the turtle. The two join forces with Chase (Hayato more reluctantly than Kanna), and after being granted creative codenames, set off to find the missing animals.

Over the course of their journey, they encounter the bounty hunter Jett, and the Dragon Warrior Zen. Zen, a warrior from a distant land, is searching for his best friend Lingling the tiger, and is eager to aid in Chase's investigation. After convincing Jett to join the team, the heroes set off on Lingling's trail, and Chase re-brands the group the "Stellar Detectives." The heroes' investigation pits them against a group of space pirates known as PULSAR (named after the pirate codes of conduct: Pillage, Unnerve, Loot, Shoot, Argue, Repeat) who are suspected of abducting the animals and culminates in an adventure inside their spaceship, the "ISS Pillager". The team manages to rescue Tutu and Nenne, who have been experimented on and mutated by PULSAR, but are unable to save Lingling.

The team manages to subdue the soldiers of PULSAR, with Jett interrogating them about who their leader is before sending them to the Galactic Authority. They claim to have never met the leaders of PULSAR, but were ordered to capture animals with a large quantity of mana, which would be drained and used to make clones of the animals to form an army. Jett sends the subdued soldiers off to prison, and as the team discusses their future plans for tracking PULSAR, the Space Pirate Commander appears, wiping their memories after telling them "'His' army will continue to grow". It is at this point that the player, having read and re-experienced the story through Chase's magical diary, regains their memories. The rest of the team starts to remember what happened as well, and make it their goal to stop PULSAR once at for all. 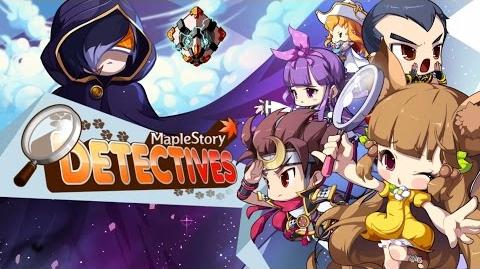 MapleStory Detectives
Add a photo to this gallery
Retrieved from "https://maplestory.fandom.com/wiki/Stellar_Detectives?oldid=238751"
Community content is available under CC-BY-SA unless otherwise noted.