Rhinne was the Goddess of Time prior to her children, Zero, one of the three Transcendents of Maple World together with the World Tree, the Transcendent of Life, and the Black Mage, the Transcendent of Light. She sheds a tear which creates her child, Zero, in a desperate move to save her own powers from the Black Mage, but Will notices this and separates her child into two; a boy (Alpha) and a girl (Beta), the former would be brainwashed as a warrior of Shadowvale and the latter would be chained in a mock replica of Zero's Temple.

Before the Black Mage was sealed, she was targeted by the Black Mage in order to consume her powers for his own purposes, but she was able to transfer her essence to her child Zero. She was not killed, although it is expressed by Arkarium that she was defeated in his report to the Black Mage. She briefly appears after a player defeats Easy or Normal Arkarium in the Temple of Time, expressing her thanks to the player for defeating her former ally. Also, she is described as an omnipresent, almighty, divine being who is currently asleep since the beginning of times and her dream is the reality, and when she wakes up it'll all disappear.

After Zero defeats Will in Mirror World and frees Rhinne, she relinquishes her role as Transcendent of Time and hands that over to her children, before disappearing. However, as she is omnipresent and an immortal being, she is revived in a younger body and makes her way to Zero's temple. 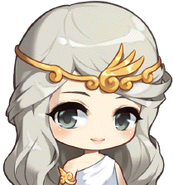 Retrieved from "https://maplestory.fandom.com/wiki/Rhinne?oldid=246471"
Community content is available under CC-BY-SA unless otherwise noted.