Piece of Cracked Dimension (to summon)

1 entry every 30 minutes
(shared with Normal)

1 clear every day
(shared with Normal)

1 entry every 30 minutes
(shared with Easy)

1 clear every day
(shared with Easy)

An arrangement with Rhinne, Maple World's Transcendent of Time, and the King of Ludibrium, has led to time being stopped in Ludibrium to preserve the youthful innocence of Ludibrium. Cracks in time and space have formed throughout Ludibrium as a result, with strange creatures appearing from another dimension. Papulatus, one of these creatures, has barricaded itself in the depths of Ludibrium's Clocktower Bottom Floor. It has been syphoning power from these dimensional cracks to grow stronger and expand the Dimensional Schism, turning the toys of Ludibrium into monsters as a result. With the expanding schism, various monsters have found their way to Maple World and started wreaking havoc throughout Ludibrium. Once you obtain the Piece of Cracked Dimension and block Papulatus's escape route, it is up to you to defeat Papulatus and destroy these cracks in time to restore Ludibrium back to normal!

Papulatus is a boss located at the bottom of the Ludibrium clocktower. It consists of a ghostly, plant-like being from another dimension who pilots a robot in the shape of a clock. Papulatus can be summoned by dropping the Piece of Cracked Dimension item onto the small hole found on the right side of the map. When the crack is filled, a glowing orb will appear at the center of the map. Dealing damage to the orb will cause Papulatus to emerge and begin attacking players.

The Papulatus found in Mu Lung Dojo, Mirror World, Silent Crusade, and Tower of Trials (JMS only) do not use these attacks.

Each player has 5 lives throughout the course of the battle.

Throughout the fight, numerous cranes will drop from the ceiling. If a player is caught by one of these cranes, they will be held in place for a short period of time. Players are vulnerable and unable to attack when held by a crane.

Papulatus will occasionally summon two lasers on either side of the map, the one on the left rotating clockwise and the one on the right rotating counterclockwise. These lasers deal no damage, but can be blocked by standing in front of them. If the two lasers touch each other, Papulatus will summon two large pendulums and crash them into each other, instantly killing any players on the screen.

Every two minutes, Papulatus' alarm will ring for 30 seconds. During this time, Papulatus will remain stationary and vulnerable to attack, but players' HP will constantly decrease at a steady rate, a potion cooldown of 6 seconds will be active, and clock springs will begin raining from the sky, dealing 10% damage and stunning players who are hit.

In the first phase, Papulatus rides on the clock robot to attack players with a variety of skills.

When Papulatus reaches around 20% of his HP bar in this phase, he will go to sleep, becoming temporarily invincible for 60 seconds. During this time, the pillar in the center of the map will transform into a wheel divided into several segments, each segment labeled with a random percentage (0%, 1%, 10%, or 100%). A portal will also appear on the left side of the pillar, and both High Darkstar and Low Darkstar mobs will be summoned around the map. Players must clear as many segments on the clock face as possible before Papulatus wakes up.

To clear a segment, players have to defeat the Darkstar mobs and collect the time bubbles that drop. When collected, the hand on the wheel will spin clockwise until it lands on a segment, with the amount of rotation depending on the value of the time bubble; Low Darkstars drop bubbles ranging in the minutes (10/30/50) and High Darkstars drop bubbles ranging in the hours (2/4/9). Players then need to use portal next to the pillar to clear the segment the hand is currently pointing at. When players have cleared all segments or 60 seconds have passed, Papulatus will wake up and attempt to heal the cumulative amount of HP (if any) remaining on the wheel.

When Papulatus' first HP bar reaches zero, Papulatus will abandon the robot for a small vehicle which flies freely throughout the map and attacks players.

Papulatus has no other special mechanics in this phase, although the laser pattern is slightly different from the first phase. 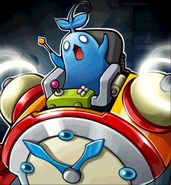 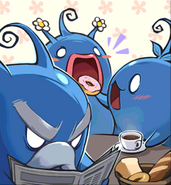