Alliance
The player
Cygnus and her knights

Neinheart Von Rubistein is Cygnus's adviser. Neinheart stands beside the Divine Bird Shinsoo and Empress Cygnus. Neinheart is the main strategist of Ereve, as he is the one who directs the Cygnus Knights to their quests and certain locations to gather certain information about the Black Mage.

In the future (or rather, the one perceived in the nightmare caused by the Black Mage), when Cygnus searches for the World Tree, Neinheart suggests not to chase after the Transcendent. Cygnus did not take Neinheart's word, and soon fell into the trap that corrupted her and the Cygnus Knights. In the future, Neinheart is the only human on Ereve who did not fall into the Black Mage's World Tree trap in the future, believing that the Cygnus Knights should not take what is not theirs and thus, he was not corrupted but instead, hiding from the heartless Knights.

Through dialog in Cygnus Knights quest, Neinheart is revealed to be the older brother of Lilin. 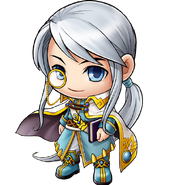 메이플특공대 - 보름달 도깨비 야시장
Maple on the Scene (parody of VJ's on the Scene) - Full Moon Goblin Night Market / Nineheart (Empress Cygnus' adviser): If you give Goblin Coins to Kkaebi (Gobiln Merchant), he'll randomly level you up. Totally profitable!
Add a photo to this gallery

Retrieved from "https://maplestory.fandom.com/wiki/Neinheart?oldid=251845"
Community content is available under CC-BY-SA unless otherwise noted.