View source
watch 02:40
World of Warcraft: Dragonflight - The Loop
Do you like this video?
Play Sound

Tyrant
Nova Traitor (by his people)

“That fool could not keep his allegiances straight if they were made of unbendable steel.”

― Hilla, talking to Gelimer about Magnus

Magnus is a former commander of the Black Mage and a commander of Gerand Darmoor. He is of the Nova race, much like Kaiser, Angelic Buster, and Cadena.

Magnus, being of the Nova race, used to reside in Pantheon, and was a close friend of the Former Kaiser, fighting alongside him. However, Magnus's insatiable lust for power led to him betraying the Nova and joining Gerand Darmoor, Grandis's Transcendent of Life and the ultimate enemy of the Nova people. Magnus, who admitted that even Darmoor was able to instill fear in him, became devoted to Darmoor, offering the Nova people in exchange for power.[4]

With this newfound power, Magnus led an army of Specters toward the Nova's capital Heliseum, murdering Heliseum's royal family, except for the princess, who was rescued by the Shadowdealers and taken to Savage Terminal. The princess would later cut off her wings and tail and rename herself to Cadena as a way to move on from her past[5]. The Former Kaiser attempted to stop Magnus, but after being outmatched, sacrificed himself to annihilate Magnus' army. Magnus managed to survive due to Darmoor's power, but was severely injured, and took the Kaiserium left behind from the Former Kaiser as his own. At the same time, Beldar informs Cartalion and Fenelle that Magnus has taken over Heliseum and that a new Kaiser will eventually be reborn.[6]

Not too long after, Darmoor sent Magnus to Maple World to recover from his wound, as well as to obtain new power[7]. There, he became a commander of the Black Mage, but maintained his loyalty to Darmoor.[8] The Black Mage would send his commanders to cause destruction throughout Maple World, which included the invasion of Kritias (when Magnus is invading, Specter mobs will be part of the army).[9] The purpose of this was to destroy any traces of Tana, Grandis's Transcendent of Light, as the Black Mage would need to capture her for his plans.[10]

Eventually, six heroes would come together to seal the Black Mage and end his reign of terror. Right before the sealing of the Black Mage, one of the heroes, Luminous, prepares to engage in battle with Guwaru, another of the Black Mage's commanders. Magnus then shows up and attacks Guwaru, stealing a gemstone from him and absorbing his powers, while seemingly killing him (though it is later revealed that Guwaru survived, with Magnus's attack merely freeing Guwaru from the Black Mage's influence). Luminous attacks Magnus to no avail, and Magnus departs, stating that he is finished with Maple World.[11]

Decades later, Magnus sends Nefarious Priests to extract the Nova Relics powering a barrier protecting Pantheon, which was capable of destroying any Specter that entered. Three young Novas named Kyle, Tear, and Velderoth, catch these priests trying to steal a Relic. Velderoth runs to get help, while Tear grabs the Relic, inadvertently absorbing it and gaining new powers, and Kyle awakens as the new Kaiser. With one Relic absorbed and another later stolen by a different group of Nefarious Priests, the barrier is weakened, allowing Magnus's Specters to invade Pantheon. Velderoth starts to become envious of their power, but remains friends with them.[12]

With the help of Kaiser and Angelic Buster, the Specters are defeated, the Relic is reclaimed, and the barrier is restored. Magnus himself shows up with the Kaiserium, defeating Velderoth, Kaiser, and Angelic Buster with ease before retreating. Cartalion mentions that Magnus possesses the former Kaiser's sword, granting him even more power than before. Realizing that they're outmatched, Pantheon's high council decides to send Kaiser and Angelic Buster to the Maple World and seek help from the Alliance. Velderoth, feeling weak after the defeat, runs away from Pantheon in search of more power[8]. Magnus eventually recruits Velderoth as his right-hand man, alongside Treglow and Victor, whom Magnus tricked into becoming his servants[13].

Meanwhile, Hilla, another of the Black Mage's commanders, confronts Magnus and demands that he return to the Black Mage's side, but Magnus refuses while stating that he never had any loyalty toward the Black Mage, leading to Hilla branding him as a traitor[14]. Later on, Hilla invades Pantheon to face off against Magnus's forces with the help of Gelimer. While conversing with Gelimer, she criticizes Magnus by saying that she doesn't know "why Magnus thought he was smart enough to beguile the Black Mage", and that "his petty intentions were no more opaque than the air itself". She also says that he "could not keep his allegiances straight if they were made of unbendable steel"[15].

The Novas later recruits members from Maple World's Alliance to help retake Heliseum. Various people from Grandis aid in this task, including Kaiser and Angelic Buster, as well as newcomers to Heliseum:

After a long battle against the Specters, the Novas are able to reclaim the capital of Heliseum, while Magnus himself resides in the Tyrant's Castle. From there, a member of the Alliance (the player character) is sent to retrieve relics from Magnus's Three Guardians: Treglow, Victor, and Velderoth. After the guardians are defeated, the member of the Alliance defeats Magnus, but reports back to Edea that Magnus did not use all of his strength. Edea theorizes that Magnus will be back for more one day...[13]

In FriendStory, Magnus's counterpart is the gym coach at Shinsoo International School. In Episode 3, Magnus and Hilla start cracking down on dating in the school, as it is forbidden. Hawkeye proposes that the player tries to get Magnus and Hilla to start dating so that he can go back to "scoring," but to barely any avail as Magnus and Hilla despise each other, similar to their Maple World counterparts. Magnus is also one of the judges in the rock off in Episode 6.

If the Hidden Mission of Episode 3 is found and completed, a bonus scene at the end is added where he and Hilla meet, implying that they really are dating - in secret. 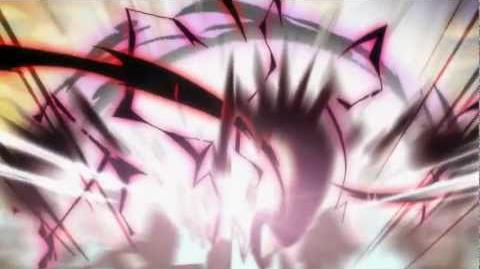 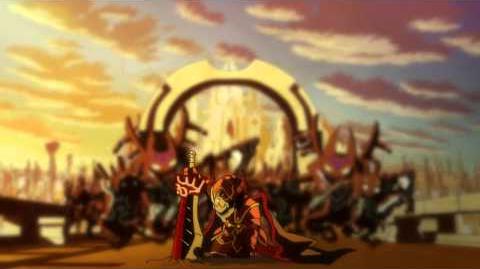 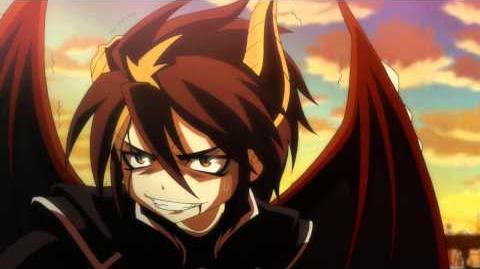 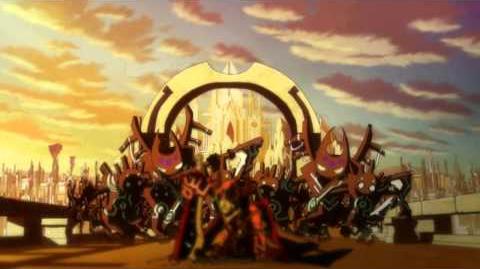 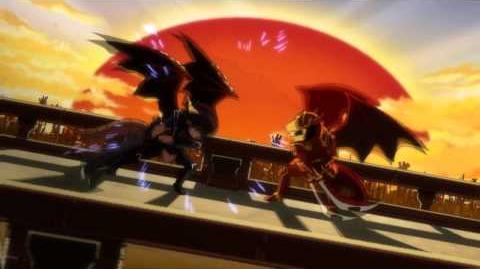 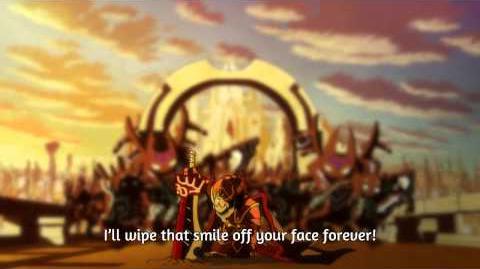 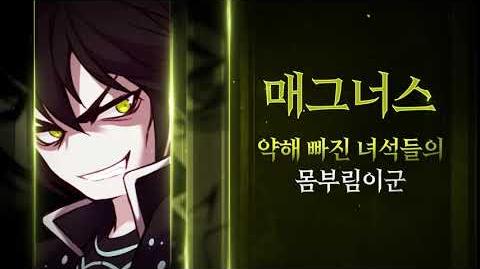 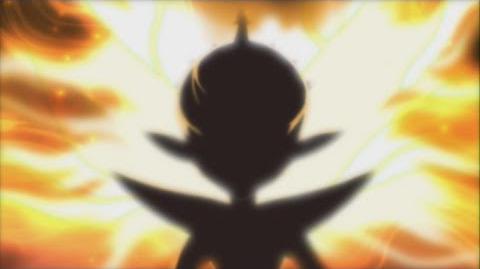 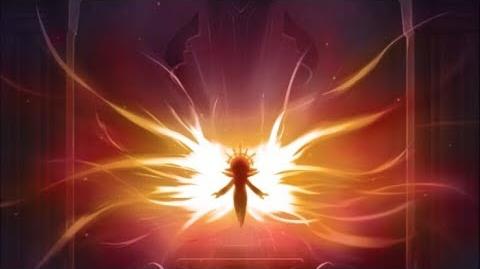 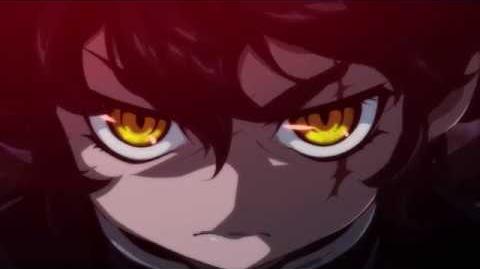 MapleStory Dawn of a New Era 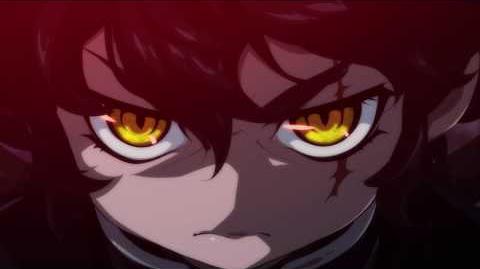 Magnus in the past. 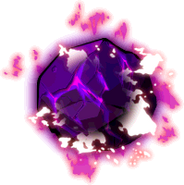 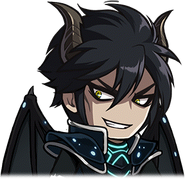 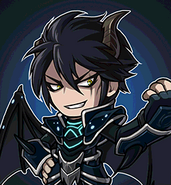 Magnus Soul Collector artwork
That is... Me! 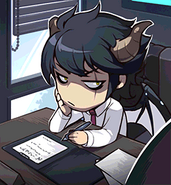 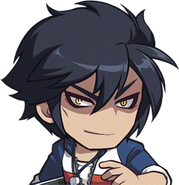 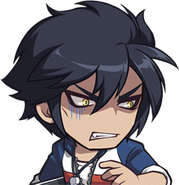 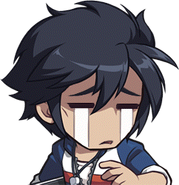