Lyon is a character introduced in the Chu Chu Island questline. He has Damien's insignia.

In Chu Chu Island, the player character meets the chief of the village, Lyon, whose cape has Damien's insignia. The player (including Demon) doesn't realize it until arriving in Yum Yum Island.

In Yum Yum Island, an area close by, where the NPCs and mobs are formed from the Erda of the most powerful beings in Maple World. The player meets NPCs resembling bosses from Root Abyss, as well as a dog that resembles Horntail, leading to the realization that Lyon is formed from Damien's Erda.

Later on after the player encounters a creature formed from Afrien's Erda, and defeats it with the help of Caster, a chameleon-chicken hybrid formed from Von Bon's Erda. After the creature is defeated, Caster nearly attacks the player once again due to being riled up into a frenzy by the button around his neck, but Lyon appears and pounces on him, knocking Caster's button to the ground and bringing Caster back to his senses. A hand with dark energy appears from Caster's button, which Lyon destroys with his cane. Caster notices the insignia on Lyon's cape (formerly Damien's insignia) and realizes that Lyon was the sun that he was looking for the entire time (showing that even in their new lives, the loyalty Von Bon showed to Damien lives on with Caster and Lyon). Puptail alerts the group to an even larger flower on the opposite side of the Fungos Forest, with no remaining traces of the creature birthed from it. The group then heads back to the village to enjoy Bappy and Muppy's party, with Lyon welcoming the villagers to Chu Chu Island. 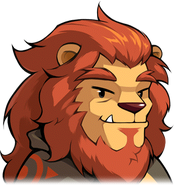 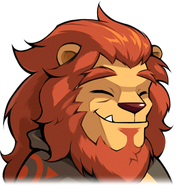 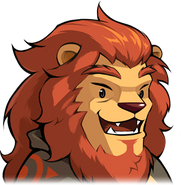 Retrieved from "https://maplestory.fandom.com/wiki/Lyon?oldid=258333"
Community content is available under CC-BY-SA unless otherwise noted.