View source
watch 02:17
New Pokemon Games - The Loop
Do you like this video?
Play Sound

Dreamkeepers
Wightmares
Everything that lurks inside the Gate to the Future

“Until the world is shrouded in sweet dreams... The festival must go on.”

Lucid is the one of the Black Mage's commanders, and has the ability to manipulate dreams. She is responsible for the illusions in the Gate to the Future, which causes a schism in trust within the Alliance. She sits atop of the Nightmare Clocktower in Lachelein.

Lucid's early life flashbacks can be found within the cracks of subconscious located in Lachelein Downtown. As players run through the quest line of the city, more cracks can be unlocked. To unlock a crack, players will have to accept the quest given by clicking on the crack. Each quest will require 10 Dream Fragments, which can be found by killing the monsters in the area.

It is revealed that Lucid was an elf from Elluel and she used to be friend with Athena Pierce and Danika. The flashback was set in the time when Lucid first discovered her ability to manipulate dreams. After a day of training with Athena, Lucid decided to continue her training alone at night. But no matter how hard she tried, her archery skills wouldn't improve. She was desperate because she wanted Mercedes' attention. And then, while accidentally falling asleep, a dream appeared inside her mind. In that dream, she performed her archery skills exceptionally well, hitting all of the targets with great accuracy and earned the recognition of Mercedes herself. After waking up, Lucid then realized she had the ability to control dreams to such an extent that her dreams could be mistaken as reality.

One day, Lucid made a music box as a gift for Mercedes, who loved it very much, in order to make an impression. Lucid wanted this gift to be for Mercedes to enjoy only. However, unlike what she had planned, everyone in the town came to listen to her music box.

Athena and Lucid both asked Mercedes to come with her and fight the war against the Black Mage. However, Mercedes denied both of them because it was too dangerous. Not giving up, on one night, Lucid decided to follow Mercedes into combat, only to see Mercedes talking to Athena. Mercedes had entrusted Athena with the task of taking care of Elluel and its treasure while she was gone.

Being Frozen in Ice and Joining the Black Mage

Being jealous of Athena, Lucid isolated herself with her dreams in a cave. She also erased everyone's memory so no one could remember or recognize her. And then, when the Black Mage was sealed by the five heroes, the freezing curse struck Elluel. Everyone including Mercedes was frozen and Lucid suffered the curse as well. However, Lucid wasn't asleep, she was kept awake for years because of her ability. This drove Lucid to insanity.

In one particular dream, while Lucid was frozen, she crossed paths with the Black Mage, who offered her more power and a new world. Lucid accepted the offer and with her new power, she broke free of the ice trapping her and brought her madness to the world.

In the present, the Alliance is arguing about the existence of the Gate to the Future. Meanwhile, Lucid and the Black Mage are watching. Lucid said that everything was going according to plan even though the Alliance has discovered the Future world was just an illusion. She also asks about the new world Black Mage promised and peeks into the Black Mage's mind, but is only able to see pure darkness. Shocked at the revelation that the Black Mage seemingly wanted to destroy everything (including himself), Lucid fled to the Arcane River and creates Lachelein, the City of Dreams, where festivity never ends and happiness is eternals. She also decides to spread this dream all over the Maple World, hoping the Black Mage would change his mind about a world without light.

After the City of Dreams is finally complete, Lucid is seen at the top of the Clocktower, holding a glass of wine and saying that everything is complete now. Suddenly she faints, making her glass shatter, and then she finds herself inside a nightmarish world. Shocked by the fact that she cannot control her own dream, she is greeted by Wightmares (Black Mage's henchmen). She commands them to leave, but they refuse, saying that she is now trapped inside her own dream for eternity. When she wakes up, she is first shocked by the fact she couldn't control her own dream, then she realizes that this is part of the Black Mage's plan. She decides to stick to her own plan, hoping to change her master's mind.

Encounter With the Player at Lachelein

The moment the player arrives into Lachelein, he finds a terrorized city, with her army of Dreamkeepers keeping that every citizen will be trapped inside the city's fake festivity, and destroying foreigners, or every citizen who tried to free himself from her control. Once the player lays his feet on the main street, she sends two Dreamkeepers to capture him, and then greets him by taunting him. Before she can command her guards to eliminate him, the player is rescued by two free citizens, the Gray Mask and the Protective Mask. Together, they discover that Lucid uses Music Boxes scattered around the city to maintain the dreams of these townspeople. They also think that the Music Boxes are used to seize control of a nightmare she couldn't control.

Once she discovers that the player is destroying her Music Boxes, she uses her powers to expand Lachelein to the whole Arcane River and beyond, turning every one who is part of her dream into a Dreamkeeper in the process. Lucid's greatest fear is finally exposed - the fear from Protective Mask, the one who can peer into her mind. The player uses that fear to confront her, and she meets the player at the top of the Nightmare Clocktower. She transports the player into her dream world and a battle ensues, where Lucid conjures Golems, Mushrooms, and Dragons. Once the dream is shattered, she keeps fighting the player in the Clocktower's ruins, but with help from the Protective Mask, the player defeats Lucid once and for all. With Lucid being defeated and the final Music Box destroyed, the dream slowly fades away from the city, and the people of Lachelein are saved from her malicious plans[3].

After her defeat, Lucid becomes trapped within her own mind, attempting to reach the Black Mage's subconscious. As the Black Mage was the center of her world, she desperately wanted to convince him not to sacrifice himself and everything else to accomplish his goals. She eventually reach his subconscious, where she saw a memory of sadness, relief, and unbridled hate (likely towards the world being tied to shackles of fate)[4].

After the Black Mage's defeat at the hands of the Alliance, Will, another commander of the Black Mage, is found unconscious in the seas of Esfera and is taken prisoner in Ereve. When Grendel the Really Old interrogates him, Will presents him with a core filled with the Black Mage's thoughts, feelings, and despair. Coming into contact with this core sends Grendel into a haze, causing him to travel throughout the Arcane River. The player pursues him with two of Grendel's disciples, Elwin and Lily, where they meet with Protective Mask in Lachelein.

The group makes their way up the Nightmare Clocktower into Lucid's room, where they peek into a mirror that contains a glimpse of Lucid's dream. Grendel (under the Black Mage's influence due to the core) is seen conversing with Lucid in the dream, where he fills the Black Mage's role. In the dream, Lucid ask her "leader" if she should stop the Alliance, as they've discovered that the Gate to the Future is her fabrication. Grendel, as the Black Mage, tells her not to, as it would teach the Alliance how free will is merely an illusion and that they would learn to hate being tied to fate. Grendel, coming to his senses, realizes that the Black Mage always intended to lose. Desiring to know more, Grendel leaves Lucid's dream and heads to Morass as the others watch from the mirror.

While Lucid is about to be consumed by her own dream, Protective Mask heads into her dream to rescue her from her own insanity. Lucid sees Protective Mask approaching her and recognizes her savior, while the mask disappears to show Mercedes's face, revealing that Protective Mask was a projection of Mercedes created by Lucid's subconscious, reflecting her deepest desire for Mercedes save her. Protective Mask carries an unconscious Lucid to the soldiers at Lachelein Main Street as the player pursues Grendel with Elwin and Lily.

After Maple World and Grandis become one again, Mercedes heads to Lachelein and convinces a hesitant Neinheart to leave Lucid under her care in Elluel. Mercedes tells him that despite Lucid's actions under the Black Mage, she waited centuries for Mercedes to save her. Neinheart disagrees, until a Cygnus soldier arrives with word from Empress Cygnus allowing Lucid to be placed under Mercedes's supervision in Elluel. As Neinheart leaves, Mercedes asks Protective Mask what will happen to him, and Protective Mask tells her that he will continue living in Lachelein until it eventually fades away. 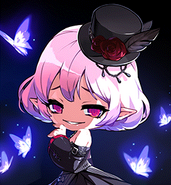 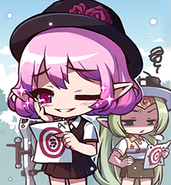 Lucid Soul Collector artwork (all souls added)
This is nothing a little elvish magic can't handle! 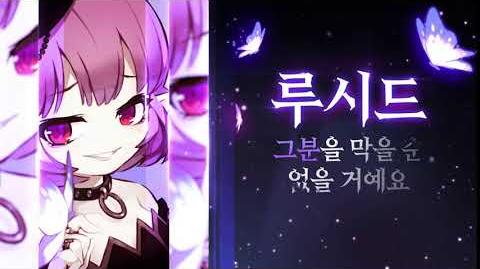 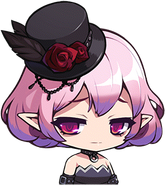 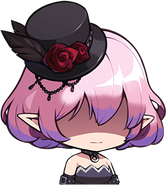 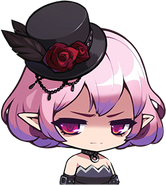 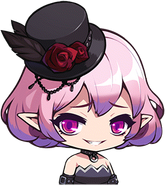 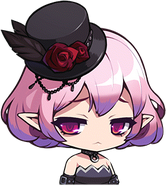 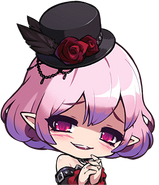 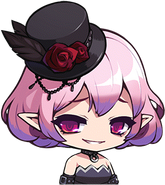 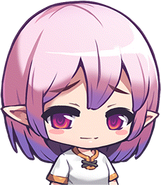 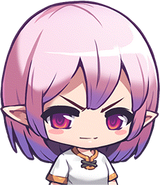 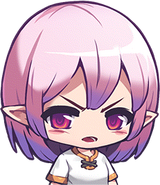 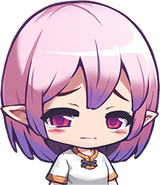 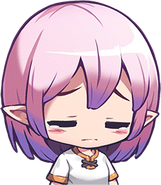 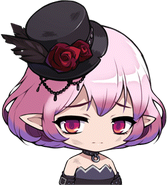 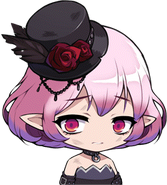 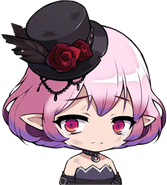