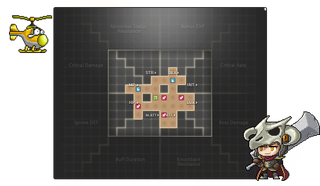 Legion System, also known as Maple Union, is an in-game system that allows players to use their characters as attackers on a battlefield while having them to give bonuses account-wide based on the level and job of each character.

This system replaced the Character Card system while retaining the aspect of character bonuses. Players now obtain additional benefits from the Synergy Grid / Union Board in place of the previous deck bonuses. [1]

To start a Legion, a player must have one of the following:

As the player raises their ranks in the Legion, they will be able to place more characters as attackers on their grid. A legion member that is not placed on the synergy grid still contributes to minimum total level requirement.

The Synergy Grid, or the Union Board, is where the player places their characters to obtain various additional stat bonuses (on top of the bonuses given from each character). Each area on the grid is devoted to giving a certain stat bonus, with the total area increasing as the player levels up their Legion.

Below are the effects of placing characters on the board. All the stat bonuses (STR, DEX, INT, and LUK) are final stat bonuses and are not affected by % stat bonuses.

These were two special blocks obtainable only by participating in the Lab Server Event. Both blocks do not take up any member slots and can be used at the same time, essentially giving players +2 blocks regardless of their current Legion Member limit.

The Lab Server was a temporary server in which for a limited-time, you can play in Lab world where you can experience different concepts and try out new systems. Monsters were 3x as strong, and drop rates were doubled, equipment from hunting were enhanced with Potential, the scroll enhancement limit is removed, and your character's level and stats will reset after death. All character data will be deleted when Lab world closes, but the rewards are kept for use on your characters in the regular servers.

The Synergy Grid has two main areas, the Inner Grid and the Outer Grid. When the player first start a Legion, the player will be given the entire Inner Grid, which gives the following bonuses based on the location of the characters placed on it. The location of each of these bonuses can be switched around for convenience. These stat bonuses are not final stat bonuses, meaning that they are affected by % stat bonuses.

As the player unlocks higher Legion levels, the player will gain access to the Outer Grid, which will have a capped amount of space/squares based on the player's current Legion level (maximum of 40 per area). The location of each of these bonuses cannot be switched around.

Each character has a different shaped piece that can occupy the Synergy Grid, based on their level and class (Warrior, Magician, Bowman, Thief, Pirate).

The rank of a card is determined by the level of the character.

There are four tiers in the Legion: Nameless Legion, Renowned Legion, Heroic Legion, and Legendary Legion. Each tier is sub-divided into four ranks.

When the player places the characters on the grid, they will become part of a Legion Raid, where they are drafted into a battle against an enormous dragon (with varying amounts of health depending on the dragon). The character the player is on can also join the battle and attack freely, whereas the player's other characters are controlled by AI in a fixed postion. There are also Wyverns that spawn in the map that only the player's current character can attack, and must be defeated for daily Legion-related quests. the player's attackers will always deal damage to the dragon, even when the player are not logged in and when the game is offline for maintenance.

Legion Coins the player can obtain, which are used for ranking up the player's Legion and purchasing useful items from Squire Pancho Sanza.

For every 100,000,000,000 (100 billion) damage dealt to the giant dragon, the player will receive one Legion Coin. Another way to obtain coins is via Dame Appropriation's daily quests:

The player's total coins is displayed on the top left in the game screen. Once the player leaves the map (by clicking the Retreat button on the right side), the player will be sent to an exit map and Dame Appropriation will reward the player coins.

There is a ranking system in place for total coins obtained throughout the week. At the end of the week (Sunday at 11:30 PM to Monday at 12:30 AM, based on the player's server's time zone), the rankings will be calculated, coins obtained thereafter will not count toward the ranking during that time frame.

The top 100 players will receive the Legion Rank Mount and the top player receives the Legion of Extraordinary Maplers Chair in addition to it. Both rewards expire in 7 days.

StrategyWiki Page (for information on formulas/calculations)