Depending on how strong you are, you can defeat Julieta in the first map, or throughout several maps. She can only be fought in Normal mode, which will have 12,600,000,000 HP (12.6 billion) HP. Some of her attacks are as follows (present in all phases except Phase 2, which involves climbing the tower):

If you fall off one of the buildings during the first 3 phases of the fight, you will take 50% HP damage, and receive a debuff blocking you from using consumables for 5 seconds, acting similarly to Lucid's Phase 2 debuff.

Phase 1: Inside the Destroyed Skuas Castle

Once you begin the boss battle, you will fight her inside Skuas, on top of several buildings. You will start the battle on the left-most building, slowly moving to the right throughout the battle. Throughout the fight, she can use her normal attacks. If you deal a certain amount of damage, she will cast a buff making herself invincible, and destroy the building you are standing on; when this occurs, you will have to jump onto the next building. There will be a total of 3 buildings that she can destroy; once you reach the 4th building, you can retreat to the castle tower.

This will be the only phase of the fight where you don't fight Julieta, but rather climb to the top of the tower before she does. After retreating to the castle tower, you will have to complete a mini jump quest to reach the top. At the entrance, you should walk slowly towards the edge rather than climbing the tower right away, because Julieta will charge into you, dealing 100% HP damage if you get hit by her as you climb. After she charges into you, she will retreat and start climbing the tower.

During this phase, Julieta will attack you while clinging on to the tower. The attacks will be the same, but her swipe attack will be slightly harder to avoid due to the narrow space you have. Once you deal enough damage, you will be able to retreat outside of Skuas.

As you escape from Skuas, move to the left, as staying on the right side of the map will cast the Slow and Seal debuffs. You will encounter 3 Frostfang Werebeasts which can grab you, casting the Petrify debuff (which can be escaped from by pressing the Left and Right arrow keys repeatedly). They have 50,000 HP, and take fixed damage of 10,000.

After a few additional seconds, Julieta will climb out from inside the castle and start attacking once more. She will now gain the ability to summon 5 Jellyrashes at a time, which will slowly float down. Like the Werebeasts, these also have 50,000 HP, and take 10,000 fixed damage. These can be defeated while floating down, but if they land, they will settle on the ground, becoming more durable. While grounded, their HP increases to 150,000, and they gain the ability to attack, which casts Seduce temporarily. They can also heal all surrounding mobs, including Julieta, for 50,000,000 (50 million) HP, which can be a hindrance if a massive amount of Jellyrashes are summoned.

Julieta will also charge toward the left side multiple times, which will deal 100% HP damage if you are in the way. After several times of charging, she will no longer do so, and you will be able to retreat to the final map.

In this map, Julieta's HP rapidly decreases on its own. This time, she will be able to summon up to 30 Jellyrashes at a time, instead of only 5. She also gains the ability to Swim; when she does this, she will retreat and swim through the air, with the dangerous spots indicated by giant pink circles on the ground. Once she is defeated here, you will be sent to the reward stage, where you can break a chest to gain various drops. 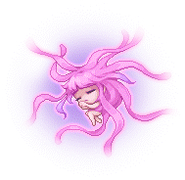 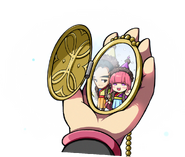 A locket containing a photo of Einar and Julieta