“A world without desire is a world at peace.”

Before pledging himself to the Black Mage, Guwaru was the Guardian Spirit of the Forest. The reason he decided to join the ranks of Black Mage's legion is unknown. The red version of him is the evil one, with the powers granted by Black Mage.

Confrontation with the Heroes

He first appeared in Luminous' storyline, challenging the magician of light. However, Guwaru was attacked by Magnus whom absorbed a gemstone from him. Having also assisted Gerand Darmoor, Grandis' Transcendent of Life, in taking over Heliseum in exchange for power, Magnus was obviously more powerful than him (powers from Darmoor and the Black Mage), therefore Guwaru was easily defeated and deeply weakened by the short fight. On the good side, this broke Black Mage's curse on him, leading him to lose the dark powers and transform back to the original Guwaru. Also, before Magnus' attack, Guwaru senses Luminous' strong light powers, proving that the darkness that corrupted him was not so powerful, or just that there was still a little light in him. Present time Guwaru also states that his powers were stolen when Black Mage completed his betrayal, confirming that it happened after he betrayed Demon, and that maybe Black Mage allowed Magnus to get rid of him because he was too weak (betraying Guwaru as well). Eventually, even Magnus betrayed Black Mage as he only needed his dark powers to gain control over Heliseum, and disappeared instead of fighting against Luminous and preventing him to face Black Mage.

At the present time, in the storyline of Stone Colossus, he tells you that his powers were abused by Magnus long ago. Because of that, the spirits of thousands of lesser life forms of the forest, who feared Guwaru's corruption, combined into Colossus. The lack of Guwaru's guidance forced them to coalesce for survival. He is mentioned by Chief Tatamo as a spirit, and he tells you that, because of his weakening, he has neglected his duties as guardian of the forest, therefore it is safe to say he is the guardian spirit of the forest and helps maplers in driving out the evil inside the Colossus, proving that he is not on the Black Mage's side anymore. He deeply regrets his falling victim to Black Mage's plans. In his last quest for Colossus, he says "Rest well, little mortal. We shall meet again."

In the epilogue of Black Heaven, Orchid met with Guwaru in Ellin Forest requesting for the true power as the Spirit of Darkness herself to kill the Black Mage. There, Guwaru reals that the adversary must be the one that will land the finishing blow on the Black Mage, which confuses Orchid.

Guwaru returns in the final confrontation against the Black Mage. He first appears after a reborn Hilla is defeated. He explains to the adversary that they are the chosen one that must destroy the Black Mage and tells them to destroy the weakening labyrinth, but they are unable to harness their new powers. Orchid loses patience over their incompetence and destroys the labyrinth herself and destroys what remains of her mask, causing Guwaru to disappear and heads to face the Black Mage herself. Shortly after, the Labyrinth crumbles and disappears, revealing Limina, the pathway to the Black Mage.

The adversary picks up Orchid's mask and finds out that Guwaru had been keeping contact with Orchid via the mask. He explains the origins of the monsters in Limina and the two head out to find Orchid. Guwaru arns them of the Erda Surges. While following Orchid's tracks, Guwaru explains the sources of Orchid's powers and that the Genesis Crux will destroy the current world and replace it with a new one and that it must be destroyed. The power of the mask begins to fade. Guwaru reminds them that only they can defy their destiny before losing contact. 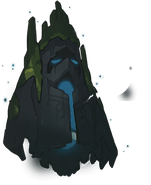 Add a photo to this gallery
Retrieved from "https://maplestory.fandom.com/wiki/Guwaru?oldid=237507"
Community content is available under CC-BY-SA unless otherwise noted.