Sino is the Fox God of Vulpes, and the Fox Anima that reside within Fox Point Village.

The Fox God is first mentioned in Shade's storyline, but takes a more subtle role. After Shade sacrifices himself to seal the Black Mage, he awakens to find himself in Fox Point Village, surrounded by various humanoid fox creatures of the Anima race. Shade soon comes to learn where and when he is, and that the Black Mage had been sealed centuries ago. Moonbeam, one of the residents and the chief's granddaughter, takes Shade to the Fox Tree, where he is granted spiritual powers and abilities after praying to the Fox God. Moonbeam, believing Shade to be too weak to survive on his own, grants him her own guardian spirit.

Months later, Shade learns of a way to return to Maple World via an Interdimensional Portal in Pantheon. After travelling back, he attempts to meet his fellow Heroes of the past, but is devastated to learn that none of them remember him. Feeling helpless, he returns to Fox Point Village, where he believes he would be welcomed, only to learn that none of the residents remember him either. Moonbeam is found praying by the Fox Tree for her powers to return, believing that the Fox God was punishing her for something she was unaware of. Shade learns that it was not his life, but his existence, that was sacrificed to seal the Black Mage, and travelling between dimensions would cause everyone to forget him.

The Fox God takes a more active role in the Fox Valley storyline. She befriends Maru, the village prankster, after saving him from being eaten by a group of squirrels, and convinces him to help the other villagers in case of danger. She frequently appeared in her humanoid form, Sino, to Maru in his dreams. Maru sees a premonition in one of his dreams, where the Fox God is unable to sense that the villagers are in danger of a terrible thunder storm. Maru tries to recruit the other villagers, but nobody is interested, thinking that it is one of Maru's pranks, so he sends out a letter for help, which is picked up by the player character. As the storm and flood get worse, Maru decides to visit the Fox God as a last resort, and traverses up the Fox Tree Top with the player character to reach the Fox God.

Once the two are beyond the clouds, they approach a staff lying around, summoning the Fox God's Sky Guardian, as well as a group of Cloud Guardians. Not knowing that Maru is friends with the Fox God, they view the two as a threat and attack them. The player character holds off the Guardians while Maru finds the Fox God, still asleep. The Fox God is awakened, and saves the village from the flood. She sends Maru and the player character back to the village, thanking Maru for alerting her.

During the aftermath, the Fox God turns into her humanoid form Sino, and discusses the matter with her guardians. As they ponder why the Fox God's vision was blocked, a mysterious symbol appears, which she deducts as the reason why she was blinded and could not sense the flood. Sino then says that it's time to visit the "elders up top". Similarly, in Detective Rave's Case Notes, Cosim says that The Company has returned and that the Disciples are making moves, declaring it time to see the "oldsters above". 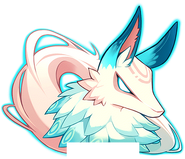 NPC Artwork of Sino (Fox Valley storyline)
Add a photo to this gallery
Retrieved from "https://maplestory.fandom.com/wiki/Fox_God?oldid=257957"
Community content is available under CC-BY-SA unless otherwise noted.