Humans / Humanity as a whole
Elves

“Humans are so greedy... I loathe them.”

Ephenia is the Queen of the Fairies of Ellin Forest. Ephenia and her fairies at one point swore allegiance with the Black Mage, causing great distress to Mercedes and her elves of Elluel. Ephenia and her fairies first made action when Athena Pierce arrived at Victoria Island with Aran's help. After Ephenia's death, peace was brought back to Ellin Forest and the fairies seem to have calmed down a bit.

A younger Ephenia is featured in the first Grand Athenaeum quest line, where her hatred of humans is given an explanation, and some justification. Before the White Mage became the Black Mage, the fairies were subjected to kidnapping by Evil Poachers, and the land being defiled by Hidden Grave Robbers. However, there was one human she did trust: the White Mage, who protected her and the fairies, while promising to return. Unfortunately, he never returned due to unexpected circumstances, souring her attitude towards humans even more, to the point where she allied herself with the Black Mage out of spite towards them. It is up to a time traveler in Ellin Forest to stop her from launching an attack on the citizens of Altaire Camp.

In FriendStory, the newly arrived Student Teacher becomes extremely popular with the girls, all of the 'unpopular' boys turn into squids (metaphorically). Ephenia became president of the PSTL (Pale Student Teacher Lovers). She is later seen on the school roof, scolding a PSTL member for ripping her letter. After the player is given an assignment by Neinheart to enter the ranks of PSTL, she allows them to enter provided that they pass Kemdi's quiz. 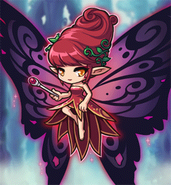 Ephenia Soul Collector artwork
I am Ephenia,
the queen of Ellin Forest. 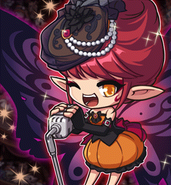 Ephenia Soul Collector artwork (all souls added)
Listen to the song of Ephenia,
the lead vocalist of the Halloween band!
Add a photo to this gallery

Retrieved from "https://maplestory.fandom.com/wiki/Ephenia?oldid=252901"
Community content is available under CC-BY-SA unless otherwise noted.