During the war against the Black Mage, Maple World was ruled by her ancestor, Empress Aria. When Aria was murdered by Lotus, one of Black Mage's Commanders, the throne of Ereve was left empty, as Aria had no children. Aria's niece was the sole survivor of the Empress' bloodline, and left Ereve after her aunt's death.

Centuries later, a young scholar from Rien named Neinheart connected the dots across history and located Cygnus, identifying her as the last member of Aria's bloodline and the true heir to the throne. He brough Cygnus before the elders of Ereve in the hopes that they would recognize Cygnus as the heir of Ereve. The elders gave Cygnus one year to prepare for her responsibilities as Empress, with their decision to crown Cygnus happening at the end of that year. To help Cygnus grow as a leader, Neinheart called an old friend to Ereve - a wandering warrior whom Neinheart had once helped.

Over the course of the year, the wandering warrior and Neinheart tutored Cygnus in subjects such as history, leadership, and diplomacy. However, during the year, Cygnus fell gravely ill. The wandering warrior found a cure for her sickness in Mu Lung, but word reached Orchid, the founder of the Black Wings, that an envoy of Ereve had sought children's medicine. Realizing that Aria's descendent may have been found, Orchid prepared for the Black Wings to invade Ereve.

At the end of the year, Cygnus was brought before the elders, who questioned her about her lessons. They asked Cygnus whether she was ready to shoulder the burdens of being the Empress - that her health would deteriorate while absorbing the power of Shinsoo, the many attempts on her life, and the constant struggle of the people of Maple World looking to her for leadership. Before Cygnus could respond, however, word arrived that the Black Wings had invaded Ereve, as the kingdom's borders were weak without an Empress to use Shinsoo's power. Cygnus agreed to take on the responsibility of being the Empress and accepted Shinsoo's power. With her leadership, the wandering warrior and the army of Ereve repelled the Black Wings' invasion.

With word of Cygnus' ascent to the throne spreading across Maple World, Cygnus and Neinheart - now the Empress' advisor - decided to create an army of knights that could fight the rising threat of the Black Wings. Together, the two tracked down the son of Chromile - a legendary warrior known as the Knight of Light. After testing his potential for combat, Cygnus offered the young man a place amongst the Cygnus Knights and gave him the name Mihile, meaning 'Born of Light'. Soon, a young bowman named Irena arrived in Ereve and asked to join the Cygnus Knights. With the power of the wind, Irena quickly proved her dedication and prowess to the Empress. Cygnus asked Mihile and Irena to become the Chief Knights of the Dawn Warriors and Wind Archers respectively, to which they obliged. Soon after, Cygnus appointed three more Chief Knights - Oz of the Blaze Wizards, Eckhart of the Night Walkers, and Hawkeye of the Thunder Breakers. With the completion of the Cygnus Knights, the Empress' court was finally complete.

As time passed, the seal on the Black Mage began to weaken. The Heroes of Maple began to return, released from the cursed ice that the Black Mage had trapped them in. One of the heroes, Queen Mercedes of Elluel, approached Cygnus and asked for her aid to protect Elluel from the Black Wings. Another hero, Aran, passed valuable information to Cygnus, warning her of the Black Wings' plot to steal Shinsoo's Teardrop - a Seal Stone given to Empress Aria by Freud centures ago.

Rumors also began spreading from the Temple of Time of a dark future for Maple World. In addition, Cygnus received word from Athena Pierce that Guwaru, a former commander of the Black Mage, had warned of the Black Mage's imminent return. Fearing these omens, Cygnus decided to create an Alliance to counter the rising darkness. She invited the Resistance, the Explorers' Guild, and the Heroes to the first Continental Conference of the Maple Alliance.

Soon after, the Black Mage broke free of his seal, and many of his old commanders returned to his side, as well as new ones such as Lucid and Will. Hoping to weaken the Alliance, the Black Mage dispatched Hilla to depose Cygnus. Disguising herself a a noblewoman, Hilla claimed that she was the long-lost descendent of Empress Aria, and that Cygnus was a false Empress. Before the gathered Alliance, Hilla presented a gem that she claimed to be Skaia, which was said to glow in the hands of those who were part of the Empress' bloodline. Unknown to the Alliance, Hilla had enchanted the gem to glow only in her hands. However, Hilla's plan was foiled by Phantom, who came out of hiding and succeeded in exposing Hilla's true identity. Before disappearing, Phantom gave Cygnus the real Skaia, which Shinsoo had entrusted Phantom with after the death of Empress Aria.

After Hilla's plan failed, the Black Mage sent Lucid to the Temple of Time ito open the Gate to the Future. There, Lucid used her powers to create an illusion of a false future, one in which Cygnus becomes corrupted by the Black Mage in the process of finding the World Tree, the Transcendent of Life. Lucid's actions successfully weakened the morale of the Alliance and spread distrust amongst their ranks. However, the Alliance's investigation revealed that the dark future was an illusion.

Soon after, the Interdimensional Portal opened in Maple World, and Cygnus was approached by Kaiser and the Angelic Buster, envoys of the Nova from Grandis. After learning of Grandis' struggle against Gerand Darmoor, Cygnus agreed to form an alliance with the Nova, offering the Alliance's support to take back Heliseum from Darmoor's loyal general, Magnus, in exchange for their support to fight the Black Mage.

Alpha and Beta  the new Transcendents of Time, also joined the Alliance after breaking free from their prison, Mirror World.

In Sleepywood, the Alliance found the hiding place of the World Tree, who was trapped in Root Abyss by one of the Black Mage's commanders, Damien. The Alliance launched a campaign to free Alicia, who was rescued and brought to Ereve, where she rested within Shinsoo's crown jewel. Some time later, Damien infiltrated Ereve and killed Shinsoo in order to capture Alicia. When Cygnus saw Shinsoo's dead body, the shock caused her to partially awaken as the fourth Transcendent of Maple World. With her new powers, Cygnus revived Shinsoo and granted greater power to the Cygnus Knights. But with her awakening incomplete, Shinsoo left Ereve in search of a way to revert her awakening or to complete it. She called one of the Cygnus Knights to Leafre, where she revealed that her duty was to protect the Empress' bloodline so that Cygnus' descendent could awaken as the fourth Transcendent of Maple World. However, Maple World was not ready for a fourth Transcendent at present, and Cygnus' premature and imperfect awakening meant that she was dangerous to herself and others around her.

The Alliance learned that Gelimer, the lead scientist of the Black Wings, had constructed a powerful warship called Black Heaven. Intent on stopping Gelimer, Cygnus called the entire Alliance to defeat the Black Wings once and for all. Tensions ran high during the battle, as mistrust between the Resistance and the Cygnus Knights was still present. However, the Alliance was able to destroy Black Heaven and save Maple World. Cygnus used Shinsoo's Teardrop, the final Seal Stone in existence, to save the life of the Alliance member who had destroyed Black Heaven. However, this action removed the final restriction on the Black Mage's power.

Damien, having captured Alicia, was ordered by the Black Mage to attack Maple World. Damien gathered an army of demons from Tynerum and launched an all-out war against the Alliance. When Damien used the Transcendence Stone to become the Transcendent of Life, Cygnus ordered the Alliance to evacuate Victoria Island while the Heroes of Maple reunited again to stop Damien.

All the while, Cygnus was plagued with nightmares of the White Mage, who told her that annihilation was the only salvation to the world. Cygnus, having mastered more of her Transcendent powers, created a powerful warship called White Sphere, along with an army of smaller warships, so that the Alliance could have their final battle with the Black Mage in his new world, Tenebris.

In FriendStory, Cygnus' counterpart is the sheltered, isolated, and incredibly lonely heiress of Shinsoo. She is drawn to the player quickly, who is very surprised that she is more out of place in Seoul than he/she is. Her philanthropic attitude towards the students, while well meaning, is viewed as naïve at times, both by the player and Neinheart. 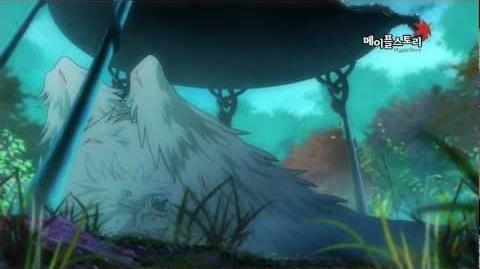 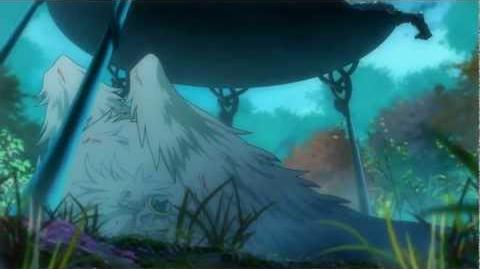 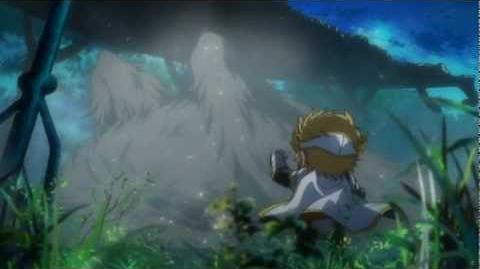 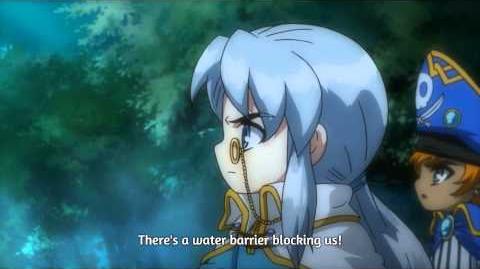 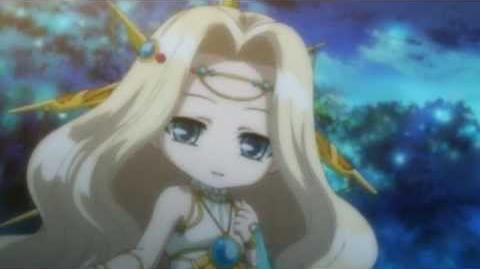 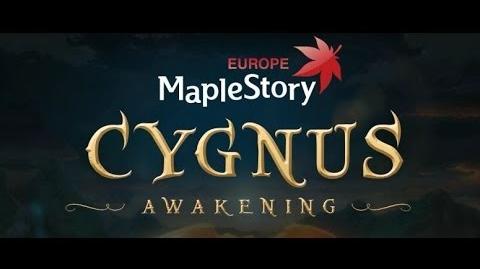 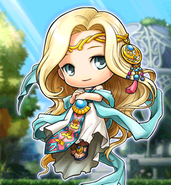 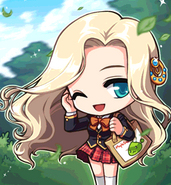 Cygnus Soul Collector artwork (all souls added)
Sometimes I wonder what other
teachers are like. 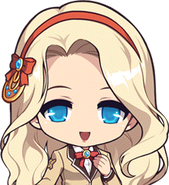 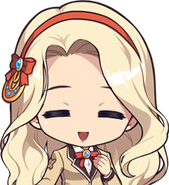 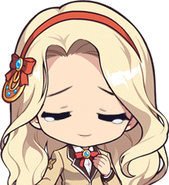 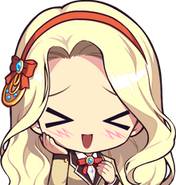 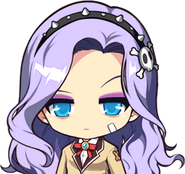 Orchid and the Hoodlum

메이플특공대 - 보름달 도깨비 야시장
Maple on the Scene (parody of VJ's on the Scene) - Full Moon Goblin Night Market / Empress Cygnus (Maple World empress, Chairman of Maple Union): I'm going to the market to be blessed with a goblin statue. I'll never miss an attack, magic attack, or experience buff.
Add a photo to this gallery

Retrieved from "https://maplestory.fandom.com/wiki/Cygnus?oldid=252671"
Community content is available under CC-BY-SA unless otherwise noted.