For the area where the Demons (Demon Slayer, Demon Avenger, Damien, etc.) come from, see Tynerum.

Masteria is a World Tour region based on many areas of the world. The three towns on the continent are New Leaf City, built on the remnants of Olde Sapp Village, Haunted House, also known as the Prendergast Mansion (which was closed down as of March 2016), and Crimsonwood, the newest area to be released. The area is the focus of the Epic Masteria Through Time.

In the GlobalMS 0.40 patch notes, Masteria is described thus:

“Masteria takes its name from the many warriors who came to the continent looking to master their fate and find their destiny. It has mysteriously risen from the sea after a 1000-year absence. This once fabled continent was home to a technologically advanced civilization that used a myriad of techniques for benevolence...before the dark times. There are very few records of the final act which caused the continent to plunge into the sea, and its jewel, Olde Sapp Village to be erased from the Maple World.” 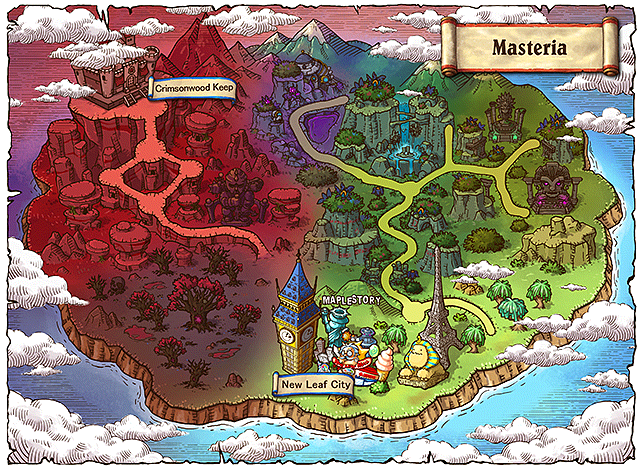