Cannoneer is a special Pirate Explorer, similar as the Dual Blade is to the Thieves. As their title implies, they are unrivalled in power specializing with a cannon, hailed as a Legend throughout all of Maple World. The Cannoneer's most unique feature is their monkey companion.

The Cannoneer was just a regular Beginner sailing on a ship to Maple Island in order to follow the process of choosing a job path until a Jr. Balrog appeared and started attacking the vessel. The crew were unable to fight back and eventually the Jr. Balrog attacked the soon-to-be Cannoneer. Possibly the only known Beginner to survive a direct attack from the Jr. Balrog itself, the Cannoneer was knocked far into the water and nearly drowned. Fortunately, a monkey rescued and brought the Cannoneer to Coco Island.

After getting acquainted with the monkey, the Cannoneer meets intellectual mastermind, Cutter, a Pirate and weapons designer who works for the Nautilus. He had created a special secret weapon on orders of his captain, Kyrin, but during an at-sea test run, his ship was wrecked and he found himself marooned on the island.

While searching for food, the Cannoneer comes across an ignition device to work a massive prototype version of the weapon that had the capability of launching them straight to the Nautilus. After utilizing it, the Cannoneer, Cutter and unbeknownst to them, the monkey, were launched towards Nautilus. Soon afterwards, the Cannoneer wakes up under the deck of the Nautilus, meeting Captain Kyrin soon thereafter. Vehemently recommended by Cutter, expressing interest in joining the Nautilus' ranks and sincerely gripping the focus and interest of its captain, the Cannoneer and the monkey are by Kyrin's order officially recruited and legitimized as Pirates. 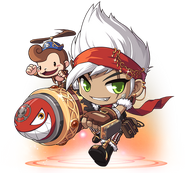 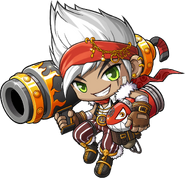 Post-RED Cannoneer artwork
Add a photo to this gallery

Cannoneer selection button
Add a photo to this gallery
Retrieved from "https://maplestory.fandom.com/wiki/Cannoneer?oldid=229783"
Community content is available under CC-BY-SA unless otherwise noted.