Burke was once Jett's partner on the planet Cerberus. However, he hated being under Jett's shadow and betrayed her by framing her for killing the king of their planet.

Burke and Jett were friends since they were children. Jett's family adopted Burke since his family was killed by space pirates. While Jett was raised by a family of bounty hunters, she aspired to become a royal guard for the king of planet Cerberus. As an adult, she took the test multiple times, but repeatedly failed the test because she was too arrogant to work in a team. Burke recruited Jett into his group of bounty hunters, and was quickly overshadowed by Jett, who possessed a family heirloom known as the Core, which granted immense power to members of Jett's family bloodline. As a result, Burke grew increasingly jealous of her power. One day, Burke heard a voice through the telecom (later revealed to be Baroq of the Black Wings) tempting him to assassinate the king and frame Jett, thus luring her to Maple World so that Burke and Baroq could steal the Core and tap into its powers. Burke was reluctant, but eventually disguised himself as Jett and assassinated the king of planet Cerberus.

After Jett became a wanted criminal, Burke helps her escape by commandeering a space shuttle. However, their shuttle is shot down, sent through a backlash wormhole, crash landing on Maple World. Burke then steals Jett's Core and attacks her after she regains consciousness, revealing the reasons of betrayal. Jett reveals that Burke can't utilize the Core because it is a heredity item only for Jett's family, but Burke merely wanted Jett to be on equal footing with him. His repeated attacks cause her to pass out, where she is discovered and recruited by Kyrin and the Pirates who agree to help her track Burke.

Burke later strikes a bargain with Baroq, trying to unlock the Core's powers using an item that the Black Wings have. However, Baroq eventually betrays Burke and traps both Jett and Burke inside a cave, revealing that he plans to use the Core to awaken the Black Mage. After Baroq leaves, Burke apologizes to Jett and sacrifices himself to let Jett escape, while revealing where he hid the Core to ensure that the Black Wings can't get it. 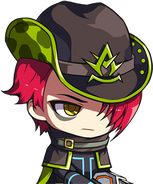 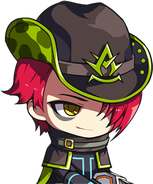 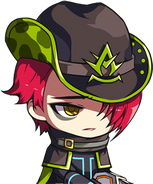 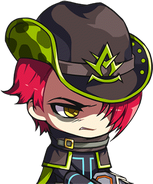 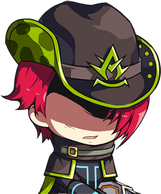 NPC Artwork of Burke
Add a photo to this gallery
Retrieved from "https://maplestory.fandom.com/wiki/Burke?oldid=227919"
Community content is available under CC-BY-SA unless otherwise noted.