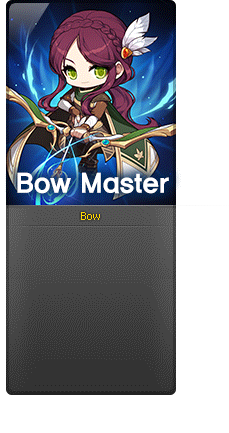 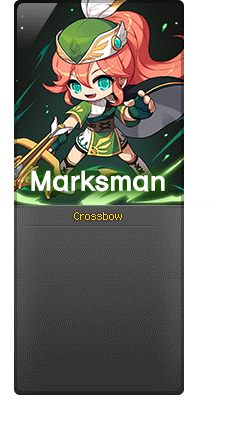 The Bowmaster job branch focuses on shooting arrows up close and afar. They specialize in Bows as primary weapons and Arrow Fletchings as secondary weapons. They have several skills to make use of their range, including Arrow Blaster, which fires arrows at a fast speed and can be installed. They also make use of Hurricane, which fires arrows like a storm at a single enemy.

They also make use of special arrows with their job specialty skill Quiver Cartridge, which alternates between 3 special arrows: Blood Arrow, which allows the player to recover HP when attacking; Poison Arrow, which deals damage over time to enemies; and Magic Arrow, which fires extra arrows at enemies when using normal attacks. This skill is upgraded in 4th job with Enchanted Quiver, which allows Bowmasters to keep using one type of arrow for a short period of time. Their second job is Hunter, their third job is Ranger, and their fourth job is Bowmaster.

Path of the Ranger

The Marksman job branch specializes in Crossbows as primary weapons and Bow Thimbles as secondary weapons. Like the Bowmaster, Marksmen fires arrows from afar, but with a bigger emphasis on firing from a distance, as their skills' damage are increased the further away they are from the monsters.

Their job specialty skill is Rangefinder, which gives two different effects based on the player's distance - when attacking up close, they will ignore more enemy defense; when attacking from afar, the player deals more damage. This is enhanced in 4th job with Bolt Surplus, which increases these effects, as well as increasing attack count for attacks that deal multiple lines. When far away, they also ignore more enemy defense with Vital Hunter, and deal increased damage to solitary enemies with Last Man Standing. Their main attacks in 4th job are Snipe, which deals a large amount of damage to a single enemy, but with a cooldown that can only be removed with a Hyper Skill, and Piercing Arrow, which deals 1.2 times multiplicative damage to each additional enemy hit after the first. Their second job is Crossbowman, their third job is Sniper, and their fourth job is Marksman.

The Pathfinder job branch, unlike other Bowmen, has its own tutorial, where it starts on Partem, as well as its own 1st job skills.

The Ancient Power and the Dark Curse

Master of the Ancient Bow

Retrieved from "https://maplestory.fandom.com/wiki/Bowman/Skills?oldid=250253"
Community content is available under CC-BY-SA unless otherwise noted.