The magician job of the Cygnus Knights, Blaze Wizards wield wild and potent fire magic. Like other Cygnus Knights, they are able to call forth the Elements to help them in battle.

The Blaze Wizards are led by the Chief Knight of Fire Oz, who resides on Empress's Road in Ereve. Aspiring masters of fire should create a Cygnus Knight, level their Noblesse to 10, and confirm their decision with Oz.

Many of the Blaze Wizard's skills are imbued with fire elemental power, allowing the player to hit harder against fire weak monsters, but be forced to give it their all or call in help against monsters resistant to fire.

The Blaze Wizard's main attacking ability is Orbital Flame, a boomerang like ability which can be aimed using the arrow keys. As the Blaze Wizard job advances, the player will be able to sustain more orbital flames out at once, up to four at a time in fourth job.

Unlike other magicians, the Blaze Wizard's teleport works by setting a return point and activating the skill again to teleport to said return point.

At Level 30, Neinheart will contact the player (you) via a light bulb and ask them to talk to Oz, the Chief Knight of Fire. Oz will send the player to the Second Drill Hall to eliminate 30 Tigurus of Exam. Afterwards, the player will have to head back to Oz to receive the 2nd Job Advancement.

At Level 60, Neinheart will contact the player via a light bulb, sending them to Helios Tower Library. The player must talk to Wiz the Librarian, who will tell the player to enter a door at the top right of the library. Upon clicking on the Old Book inside the room, 10 Black Mage's Disciple will spawn. Chief Knight Hawkeye will appear after eliminating them, expressing how impressed he is with you. He will then send you back to Neinheart, who will grant you the 3rd Job Advancement.

The player will be sent into Cygnus's dream, where Cygnus is staring into a mirror of the future and seeing her corrupted future. She freaks out, and faints as her corrupted future breaks out of the mirror and into Cygnus's dream world. The player must then defeat her future self in order to be transported back to the real world. Then, talking to Cygnus will reveal that the "report" Neinheart requested the player to bring to her was actually a letter of recommendation for the player, and will advance the player to 4th job. 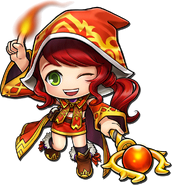 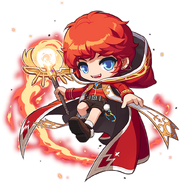 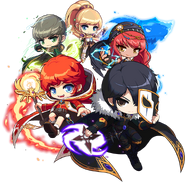