The Battle Mage is a member of the Resistance that condenses magical power and uses it for strength and protection. Unlike other Magician classes, the Battle Mage specializes in fast, close-range combat that overpowers foes. The Battle Mage uses staffs to decimate multiple enemies with flashy attack spells and casts auras to aid the party a character is in.

The Battle Mage is unique amongst Magicians as it is primarily a melee combat character. Using their staff to beat back the Black Wings, the Battle Mage will be the first into danger, placing themselves between their teammates and the forces of darkness. Battle Mages also have Aura abilities, which allow themselves to buff themselves and their friends in combat.

At Level 10 as a Citizen, the player have the opportunity to become a Battle Mage. Talk to Headmaster Ferdi in Edelstein. He will issue a letter, which can be used to teleport to the Secret Plaza when used. Afterwards, speak to Brighton to advance to a Battle Mage.

At Level 30, Ferdi will tell the player to return to the "school" for an "after-school training program". Talk to Brighton, who will send you to the airport. When you arrive, you will have to defeat Schiller and obtain his Black Wings Report. Return to Brighton to receive your 2nd Job Advancement.

At Level 60, Ferdi will tell the player to return to the "school" for a "special training field trip". Talk to Brighton, who will send you to Road to the Mine 1. Accept the quest from Stephan and pay 100,000 mesos for a Black Wings Hat in order to enter the mine. Defeat the Energy Conducting Device and return to Brighton to receive your 3rd Job Advancement.

At Level 100, Ferdi will tell the player to return to the "school" for a "special training emergency roundup". Talk to Claudine, who will be giving you the mission instead of Brighton, who has gone missing. Head to Second Square to speak to Gelimer and convince him to give you the card key to his secret invention. Head to Security System Research Center 3 and enter the pipe, and find Brighton. Defeat Poison Gas Generator and return to Secret Plaza with Brighton to receive your 4th Job Advancement. 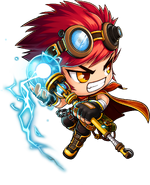 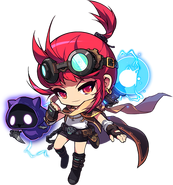