“I suppose I should thank you for barging in here. If you hadn't gone to the trouble of destroying my life's work, I would feel a slight pang of guilt at making you suffer!”

― Arkarium, talking to the player right before his boss fight

Arkarium, also known as the Guardian of Time, is one of the commanders of the Black Mage, and is said to be his right-hand man.

Arkarium was formerly a servant under Rhinne, Maple World's Transcendent of Time. Arkarium soon came to learn of the Black Mage's plans, and decided that serving the Goddess Rhinne was futile. Arkarium attempted to coerce Rhinne into working with the Black Mage, but when she refused, he used his powers as the Guardian of Time to seal her and prevent her from seeing the future. Rhinne created a child to inherit her powers as a fail-safe. The Black Mage sent another commander, Will, to split the child into two to prevent it from becoming a true Transcendent[3].

In the 52nd year of the Hekatonian calendar, a tragedy struck Trueffet Square in Kritias; a rope supporting an Anti-Magic Stone snapped, causing the stone to fall and explode, killing everyone in the vicinity except for one girl: Tana, whose body regenerated in front of everyone without her memories. She was captured by the guards and taken to Trueffet's dungeon, where she was experimented on to find the source of her immortality for King Hekaton. Having experimented on her for nearly 2 years, the researchers, including a priest named Shey, discovered that while her body regenerates itself perfectly, her memories and emotions are always wiped. The former High Priest resigned due to the experiments being inhumane and beyond their understanding, stating that "This is neither magic nor science. It is beyond human; it is of the gods. We have overstepped our bounds."

Arkarium (who was still serving the Goddess Rhinne at the time) arrived as the new High Priest to help Hekaton ascend to immortality. Arkarium made great progress, but struggled to find the reason for the recipients rejecting the transfer of Tana's power (disintegrating their bodies as their souls desperately attempted to recreate bodies in the forms of horrible monstrosities), and wanted to ensure that Hekaton would not encounter the same fate.

Jean, a young beggar who was saved by Tana during the tragedy 2 years ago, broke into the dungeon to visit Tana daily, comforting her and reading her stories. During another experiment, Tana reacted, but Jean calmed her down by hugging her, ending the reaction. Arkarium witnessed this in secrecy and realized that Jean was the key to ensuring a successful transfer of power to King Hekaton. Jean formulates a plan to escape with Tana and asked for Shey's help in finding an Anti-magic Stone Necklace as a wedding proposal gift for Tana. Jean and Shey encountered Arkarium, who tricked the two into thinking he wanted to protect Tana and prevent a horrible disaster from engulfing Kritias.

On the day of Jean's plan, Arkarium led the two into a trap by brainwashing Shey into calling for the guards. The guards then killed Jean, hurting Tana and leading to her power being transferred to King Hekaton. However, Jean had a backup plan: the necklace he gave to Tana contained anti-magic, and she destroyed it mid-ritual, causing her body to disappear and cursing Hekaton eternally. Arkarium and some of the researchers escaped, including Shey, who exiled himself and became a vagabond[4] .

The Black Mage would send his commanders to cause destruction throughout Maple World, which included the invasion of Kritias (when Arkarium is invading, Temple of Time mobs and Netherworld Monks will be part of the army).[5] The purpose of this was to destroy any traces of Tana, Grandis's Transcendent of Light, as the Black Mage would need to capture her for his plans.[4]

The Black Mage gave credit to the Demon, another commander, for defeating Rhinne and securing the Temple of Time, knowing that giving credit to the Demon would set off a series of events that would lead to his unsealing. Arkarium, who was in the vicinity, became envious at the Demon for receiving credit for his work[6]. Arkarium then destroyed southern Minar Forest, where the Demon's family (his brother Damien and his mother) lived, and sent his minions to attack the two of them. Damien's powers awakened in that tense moment, causing him to lose himself briefly. Arkarium used this to his advantage by convincing Damien that he killed his own mother. He then recruited Damien, promising that joining the Black Mage would allow Damien to rewind time and save his mother.

During a meeting with the Demon, himself, Von Leon, and Orchid, Arkarium brought up the destruction of southern Minar Forest, as commanded by the Black Mage. The Demon, angered at the revelation, heads back to his home to find it engulfed in flames, with his brother and mother missing and a locket left behind. The Demon declared that he no longer served the Black Mage, and had his servant Mastema deliver a letter to the Heroes of Maple. As the Demon attempted to confront the Black Mage, Arkarium intervened. After a scuffle, Arkarium attempted to use an all-out attack until the Black Mage's doors opened, inviting the Demon to his throne. Arkarium left and went to face the Heroes. He also learned of the Demon's orders to Mastema and attacked her, leaving her for death. She transformed into a cat in order to survive, looking for a way to revert back to normal and regain her powers.

The Demon's attack aided the Heroes in sealing away the Black Mage and ending his reign of terror. However, Arkarium knew that the Black Mage would return one day, and awaited his unsealing.

Mystic Gates and the Crack in Time

Arkarium later created several Mystic Gates and empowered many Master Bosses (Timer, Deo, and many more). With this energy, he entered Leafre's Past through a crack in the Temple of Time and attempted to unseal his master. He was stopped by a Mapler, although it turns out that this Arkarium was a decoy and the real one vanished to the Dimensional Schism. In an expedition, he was defeated temporarily[7].

After the Black Mage's return, Arkarium collaborated with the Black Mage's other commanders to enact his goals. After Will's initial defeat by Zero (Alpha and Beta, the "children" of the Goddess Rhinne), the commanders invited Zero to Grandis's skies to discuss their plans. Arkarium greets them and tells them they don't want any trouble. Arkarium and Hilla reveal that Grandis would be merging with Maple World due to the absence of Transcendents in their world, and propose an alliance to the twins. After the twins reject the commanders' offer, Damien, who has been under Arkarium's tutelage, calls them "arrogant fools", while Arkarium tells Damien not to lose his temper. After trying (and failing) to convince Zero to join them, Hilla reveals that Will is merely hiding, and would return later on[3].

Gelimer later proposed his plans of world domination to Arkarium and Hilla, which involved a massive airship he named the Black Heaven, in an attempt to be appointed a commander of the Black Mage. After Gelimer leaves, Arkarium expresses doubt that Gelimer's plans of building a "tiny airship" will work, but Hilla tells Arkarium not to underestimate the size and strength of the airship. The Black Heaven would have thwarted the Alliance if not for the player character, who defeats Gelimer once and for all. After Gelimer's defeat, the Black Mage tells Arkarium not to lay a finger on the player character (now dubbed the "Adversary"), and sends Damien to complete his next task[8].

In Heroes of Maple, he oversees Damien, who has been tasked with subduing the World Tree, and suspects Damien of planning to betray the Black Mage. Arkarium threatens Damien, reminding him that he froze Damien's mother in time when his home was engulfed in flames to protect her, and tells Damien not to act up or else he would kill her. Damien instead threatens to kill Arkarium, and heads off to take care of the World Tree.

Damien later steals the Transcendence Stone from the Heroes of Maple for his own goals. Arkarium confronts Damien, believing that Damien intends to use the stone to destroy the Black Mage. Arkarium incapacitates Damien and reveals that he destroyed Demon and Damien's home and killed their mother, and that him keeping her alive was an illusion the entire time. He says that the only reason he took Damien under his wing was to break his brother. However, Damien reveals that he used the Transcendence Stone to absorb the World Tree's power. He breaks free from Arkarium's shackles and kills him.

After Damien's defeat to the Heroes of Maple, Arkarium returns to the Black Mage in the body of his snake familiar, having used it to retain his life force. Hilla taunts him by telling Arkarium that this is his punishment going against the Black Mage's plans. The Black Mage declares it is time to face the player (the adversary), and opens a path for the player to reach and battle him once and for all[9]. Arkarium, in his snake form, slowly treks up the stairs and grabs a cane, imbued with the Black Mage's power, to restore his normal form. The Black Mage then orders him to lead Tana to him. Arkarium is confused since Tana was unable to control her powers, but the Black Mage tells him not to doubt his will, for he doesn't understand what Tana is truly capable of. Arkarium accepts his orders, while secretly planning to dispose of Tana himself[10].

Later on, the player encounters Arkarium once again in Morass, attempting to trick Tana into helping the Black Mage. Tana, having lost her memories and possessing power beyond what is known, turns the entirety of the Morass into a replica of Kritias, before it was struck by disaster. The player is turned into Shey the priest, the Flying FIsh is turned into Jean, and Arkarium is turned into a younger version of himself. The three are forced to relive Tana's memory in Kritias.

On the day of Jean's plan, Shey (who regains consciousness as the player) realizes that Arkarium, who was never truly under the influence of the Morass, led the two of them into a trap, and Arkarium calls for the guards (which he originally brainwashed the real Shey to do), who then proceed to kill Jean. The rest of the scenario unfolds with Hekaton becoming cursed.

Arkarium reveals to the player that he caused these events to reoccur in Morass because he was curious as to how Hekaton's ritual failed. He then kidnaps Tana and attempts to transfer her power to himself, having learned that Tana has the power to control Erda, the source of all life. The player goes to take down Arkarium after realizing that Jean, who was really the Flying Fish, is still alive. The player fails to defeat Arkarium, but Jean consoles Tana once more, ending the ritual. Tana, having gained control of her powers, defeats Arkarium.

I am not the one you seek. The Black Mage commanded me to relay this message to you...
You have done well. Rest.

In FriendStory, Arkarium's counterpart is the elderly science teacher at Shinsoo International School. While not a villain, the repressed jealousy he feels at the affection Hilla and Magnus feel towards each other (or so it seems) makes him easy prey for a Born Single Troublemaker, whom the player faces at the conclusion of Chapter 3. 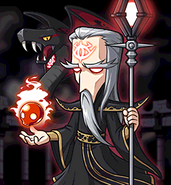 Arkarium Soul Collector artwork
Everything is going according to his plans... 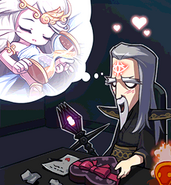 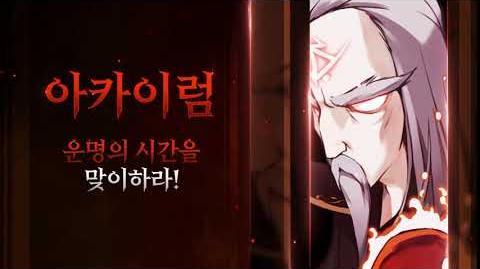 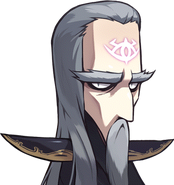 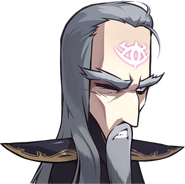 NPC Artwork of Arkarium, reduced to his snake form

Artwork of a Younger Arkarium in Morass

Artwork of a Younger Arkarium in Morass