The World Tree, also known as Alice or Alicia, is Maple World's Transcendent of Life and is the source of life itself.

Long ago, the Black Mage tried to rob the World Tree of her powers, but she escaped and retreated to the Root Abyss to recuperate. However, she was found by a commander of the Black Mage, Damien, who sent his generals to taint the area in order to keep her trapped inside. After the Alliance found her, they realize that something is keeping the World Tree at bay despite all the methods of escape being used. After defeating Damien's generals, the World Tree requests to see the world, since she has been underground for so long and has not been able to see the surface. However, the Alliance convinces her to rest in Ereve, as they both know she will be safer there. Upon arriving, the World Tree disappears into Shinsoo's crown jewel.

The World Tree also created the Tower of Oz, based off her favorite story The Wizard of Oz, long ago to preserve the natural ecosystem of the creatures living on Maple World when the Black Mage started corrupting them. However, as time passed, the tower became corrupted and affected the monsters, including the tower's guardians. For some reason, the World Tree split her soul into the Tower and her main body resides in Root Abyss. The soul requests maplers to purge the tower from evil.

In the future, Cygnus was overly obsessed with the World Tree and sought to find it. She eventually did, but it was actually a trap laid by the Black Mage. Cygnus and her knights became corrupted and Ereve crashed onto the surface of the world. Her forces then began to proceed in overtaking Maple World. Shinsoo of the present reassures that that is only a dream created by the Black Mage using the Dream Stones, and the future is not as depicted as it is, as Maplers from the past stopped the Cygnus from the future.

In the Grand Athenaeum chapter 4, she is seen wandering through El Nath and apparently trying to try to take a thorny bear with her. She meets a bard called Ryude. The bear attacks Alicia and Ryude kills it. Alicia says she needed it and the bard says they can find her a new one and takes her to his camp. Afterwards, she and the camp sees smoke coming from the Lion King's Castle and go check it out. Ryude and his friends stand outside the gates

wondering where everyone is. Alicia leaves as dawdling will get them nowhere. After Ryude is defeated by the Lion King and is about to be slain, Alicia interferes, carrying a baby thorny bear, and teleports Ryude to safety. After the bard awakens, he, his friends, Alicia and survivors of the castle make way to the Dragon Master's Tower. They hold a formidable defence and successfully activate the beacon, calling the Heroes. Many years later, Alicia returns to the tower, with the bear now grown up, where the body of Ryude still stood. She tells him about how his death was not in vain, the Black Mage is defeated and that she gave a helping hand in it as well. She then put his soul to rest, and takes his sword for safekeeping.

Heroes of Maple and Damien

In the second blockbuster, the World Tree was predicted to be in danger, from the future vision seen by Freud: "When the battle of the end approaches, the wolf that is released from its shackles will devour the World Tree". In order to prevent this from happening, Freud set aside plans, even an airship Abraxas to ensure that his friends and future successor will be able to save the future.

After the Heroes defeated Damien, Alicia uses her powers to spread life in the Maple World, restoring the world's vitality. 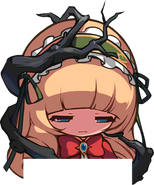 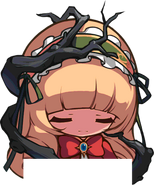 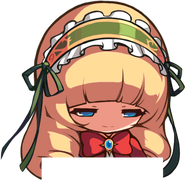 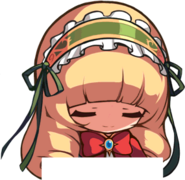