Agate is a character.

Agate, one of the members of the Verdant Flora race, barely managed to escape the onslaught of the war and protected her teacher's ancient crystal. She later became the headmistress of the Crystal Academy in Sanctuary, located in the deepest part of Grandis. She remained in the academy to guard the crystal and seek to find the one that will become the hope of the race.

Illium's actions were discovered by Agate. After having a discussion with Darius, she decides to handle the situation herself, witnessing Illium's burst of magic power to defend himself from monsters.

Agate eventually brings Illium back to the Sanctuary to punish him for escaping. As she had witnessed his powerful burst of magic, despite his young age and irregular flow of magic (as well as lack of glowing wings), she decides to take him under her wing. She permits Illium to attend Crystal Academy, an elite school only for students capable of using crystal magic.

At one point, Illium was in the academy laboratory working on making a prayer sculpture for a ceremony, and the Elder Crystal resonates with him, initially frightening him. Agate witnesses this phenomenon, realizing that the boy would be the one to save their race.

Academia Under Siege and Awakening

At one point, Darius betrays the Verdant Flora, allowing for Gerand Darmoor to send his minions through the crystal gate and attack the academy. Illium and his classmates hid in the academy, but were forced to evacuate due to the destruction. Illium is unable to escape as the nearest Crystal Gate is closed by Darmoor. Wanting to protect the Flora race's last hope and student, Agate defends Illium but eventually exhausts her own powers and safety.

Knowing that her own time might be up, Agate entrusts the Elder Crystal to him, hoping that Illium will be able to save their race. She eventually dies from her wounds, leaving her student grief-stricken. Knowing that he must fight and fulfill his teacher's last wishes, Illium uses the crystal's powers and awakens into a new form, resulting in a new appearance and a massive increase in power. He fights through all of Darmoor's minions and rescues his scattered classmates, escorting them through the last Crystal Gate to the Savage Terminal.

Nexon has commissioned an artist to draw a webtoon called Grandis – The Ancient War, which serves as a prologue of Illium's story. The protagonist of this work is Agate. 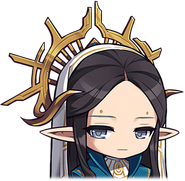 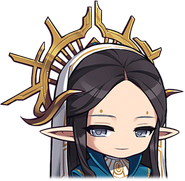 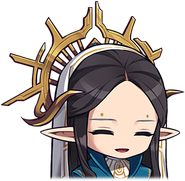 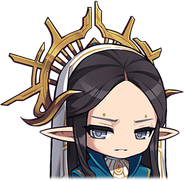 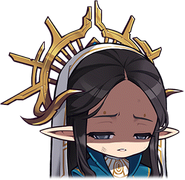 NPC Artwork of Agate
Add a photo to this gallery

Retrieved from "https://maplestory.fandom.com/wiki/Agate?oldid=266027"
Community content is available under CC-BY-SA unless otherwise noted.